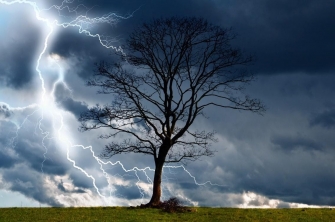 By Miriam Raftery
Photo via the National Oceanic and Atmospheric Administration (NOAA)
June 29, 2021 (San Diego’s East County) – Monsoonal moisture may bring thunderstorms over San Diego’s mountains and deserts Tuesday through Thursday, with flash flooding, lightning strikes and damaging winds possible particularly in the afternoons and evenings.
High heat risk continues, along with an elevated fire threat. Temperatures are expected to be in the mid-90s for most areas east of I-15 and in the 80s for inland valleys, 92 to 105 degrees in the mountains, reaching up to 116 degrees in San Diego County desert areas, according to meteorologist Elizabeth Schenk.
High humidity will make conditions feel muggy, as in the tropics.  Avoid strenuous outdoor activity; a heat-related death occurred last weekend on a trail in Anza-Borrego during excessive temperatures.
Dry conditions are expected to return to the region Friday through the Fourth of July weekend.
Cal Fire reminds the public that fireworks are illegal in California and pose a serious fire hazard, particularly during this year’s hot, dry conditions expected over Independence Day.