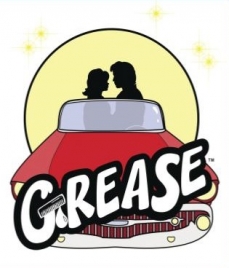 April 23, 2018 (Spring Valley) – Realization: most of today's high school students probably haven't see the movie “Grease.” Since the movie is one of my favorites and was popular for so long, I guess I always figure everyone has seen the movie. Then I heard a girl behind me saying she had never seen the movie. Light-bulb moment: not only have these kids not seen the show, they probably really don't know fifties music. The whole show is an alien piece to them.

Thank goodness for teacher and director Julie Benitz, who does an amazing job grounding students in the world in which they are to be immersed. Though the show has millennial touches, these young actors pull of the fifties just fine. “Grease” the play is not  “Grease” the movie. The major difference I feel is the play is not just about Danny and Sandy, but eleven teens dealing with the pressures of being a teenager—a theme in other productions this season including the powerful drama they presented last fall, "Kiss The Girls and Make Them Cry” which took place in a contemporary high school.

The strongest point of the Monarch’s version of “Grease” is Christian Najee Gordon, playing Danny Zuko. You can easily see why he got the role. Wow, what a voice! Most of the time in high school plays, the role of Zuko goes to someone who can't sing and who may just showcase the attitude of Danny. Gordon could easily compete on “American Idol.”

Isabella Milligan plays Sandy. Her strong point is her transformation from Sandra Dee to someone who could suit Zuko. Joceylyne Garcia plays Rizzo and she actually brought a few tears to my eyes when she sang "There Are Worse Things I Could Do” in a tender, moving moment. Jan and Kenickie, Zaina Price and Olesia Winbush portrayed characters I recognized the moment I saw them on stage. They did a great job getting into character. Overall, “Grease” was a well-cast play.

The music is fun, toe-tapping fifties tunes that tell a story. Another thing I like at Monte Vista is the way they sometimes build these rising mini stages on the sides, makes the play easy to see--great for spotlight moments.

It’s time to support high school spring theatre. If you love “Grease," this is different than the movie, but a great place to introduce your teen to theatre. It’s a fun-loving production with characters you can relate to and discuss-- Bad Boy, Good Girl, Mean Girl, Jock, gangs, hopes, dreams and love.