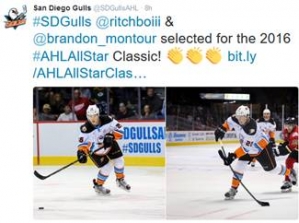 By Liz Alper
January 7, 2016 (San Diego) - The Gulls have made quite a splash in San Diego since their return to America's finest city, and now two Gulls players are heading to the 2016 Toyota AHL All-Star Game.

Defenseman Brandon Montour and left wing Nick Ritchie have been named to the All-Star Game, taking place in Syracuse, New York on January 31 and February 1.  Both players are rookies making their first appearance in the All-Star Game.
Montour, a 21-year-old native of Brantford, Ontario, Canada, has tallied six goals and 22 assists in 30 games with only eight penalty minutes.  He leads the league in power play assists and power play points.
Ritchie, who is 20 years old and comes to San Diego from Orangeville, Ontario, Canada, has 12 goals and eight assists in 21 games played.  He has also played 11 games with the Gulls' NHL affiliate, the Anaheim Ducks, where he has tallied one assist, in a game November 30 versus the Vancouver Canucks.