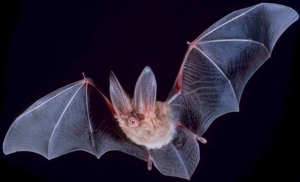 October 21, 2014 (San Diego) – Five bats have tested positive for rabies in North County, the County reports. County health officials are asking for public help to identify five children who found a bat on Saturday outside the Pizza Nova outlet on North Twin Oaks Valley Road in San Marcos. The bat later died and was confirmed to have rabies.

Dr. Eric McDonald, deputy county health officer, says, "We want to make absolutely sure that no one was potentially exposed to this deadly disease."

Health officials warn that you should never touch a bat, living or dead, or any other animal known to be susceptible to rabies.

County health officials say people should never handle a bat or any other animal that might have rabies. Though usually spread by animal bites, people can contract it merely by touching the animal. Saliva can be found on the animal’s body and if it comes in contact with the mouth, nose or eyes of a person, that person can contract rabies.

If you know the identity of the children who handled the bat, their parents, or anyone who may know how to reach them, please contact the county health agency as soon as possible at (619) 692-8499.

Symptoms of rabies in people can take weeks to months to develop after exposure to a rabid animal has occurred. Once symptoms develop, rabies is almost always fatal--but prompt treatment soon after exposure to the deadly virus will prevent the disease, according to the county.

A man who was exposed earlier this month to a rabid bat at the Del Mar Mud Run has been located and is undergoing preventative rabies treatments, the county has indicated.

The City of San Diego installed stadium style lighting on Lower Otay Lake's Savage Dam. In the Spring the lights attracted clouds of moths, then thousands of bats that lived in the dam. An amazing sight.