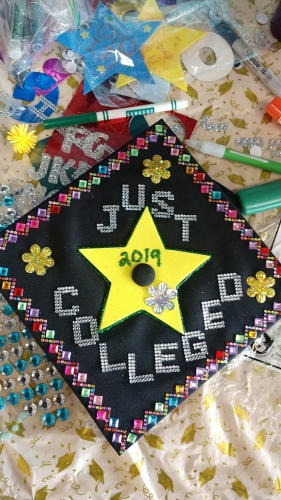 June 3, 2019 (El Cajon) -  Commencement is a day of celebration, but for some, the pomp and circumstance is more than they can afford.

For the past 15 years, longtime Grossmont College staffer Juliette Harrington has quietly paid for the caps and gowns of dozens of graduates who might otherwise not been able to participate in commencement. This year, Harrington, a Health Services specialist, wanted to help more students and thanks to a $500 grant from student government and a vendor who provided a sizable discount, 105 students received caps they can treasure as keepsakes and six will be provided loaned gowns, all for free, for the ceremony taking place at 5 p.m. Wednesday at the Grossmont College Main Quad.

Among the cap recipients are students unable to take part in the time-honored processional because of job and personal commitments. 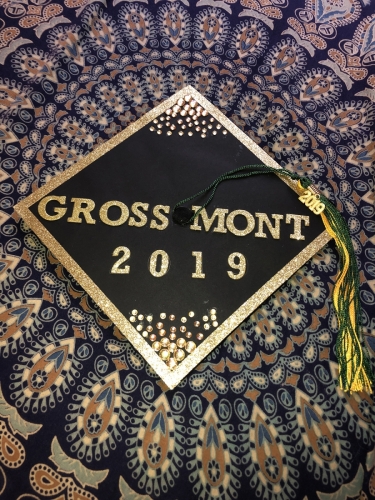 “About half of all graduates are unable to attend commencement for a variety of reasons and they are so grateful and appreciative to receive a cap they can keep as a reminder that they’ve accomplished something to be proud of,” said Harrington, who added that last year, her musician husband pitched in to help a handful of graduates of the music program.

Including the expense of graduation announcements, student pay about $60 for regalia. “We are proud of all our students,” Harrington said. “This is a special thing for them.”

To personalize the mortarboards and to make them that much more meaningful as mementos, Harrington stocked up on glitter and craft adornments and, with the help of a team of volunteers, set up a space during finals week that doubled as a decoration and relaxation station.

Students with Associated Students of Grossmont College as well as student workers in Health Services pitched in with decorating about half the caps, joined by other students eager to give their own caps some sparkle.

“It was a fun and happy way to end the semester,” Harrington said, noting that so many students took part that it gave rise to a cap decorating competition. Prizes were awarded and winning entries shared via social media.

ASGC member Carlos Espinoza is one of the students receiving a cap and gown.

“It is an honor knowing there are resources and people who care enough to step up so that finances aren’t such a burden students can’t attend their own graduation,” he said.  “Commencement is a way to showcase the hard work that you have done as a graduate. What Juliette has done helps students so they don’t have to worry about how to pay for their caps and gowns.”

The publicity-shy Harrington would as soon remain anonymous for her efforts, but she hopes that by talking about her labor of love, others would be inspired to pitch in next year when she goes for more grant dollars and also kicks off a donation drive for commencement gowns. 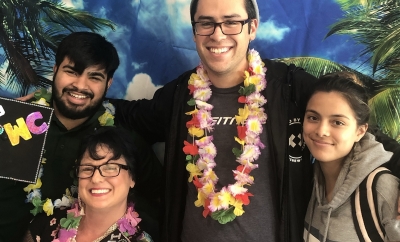 “I hope to inspire others by example,” said Harrington, who graduated from Grossmont College a generation ago and cherishes the memory of her own commencement.

She credits math instructor Irene Palacios for helping to find students who would benefit from getting a cap and gown.

Palacios said many students do not take part in the ceremony because of the extra fees.

"I was one of those students and I regret not walking,” she said. “I convinced the students to not let this stop them and that we could help.”

One student who has already put her graduation cap to use is Janelle Silvas, who wore hers at the college’s LatinX graduation and transfer ceremony held last week. While she is not participating in Wednesday’s commencement because she is transferring to San Diego State University in the fall without an associate degree, she is grateful that she had her cap and was able to take part in the LatinX ceremony celebrating her academic progress.

“Juliette wanted to make sure we transfer students felt included in the celebration of completing community college,” Silvas said. “Her and Irene’s efforts to create a memorable and accessible graduation ceremony is something that should be recognized. Juliette radiates compassion for others and her impact on Grossmont College is remarkable. I am proud to attend a college where faculty and staff care deeply for students and our personal success. Our success is inherently theirs and rightfully so.”