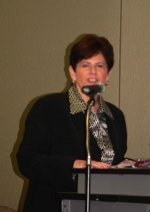 Dumanis said her office has taken proactive steps to educate the public through free seminars to prevent more people from losing their homes to scammers. “One scam was land grants,” she said. Scammers would offer to help people keep their homes for a few thousand dollars if the homeowner would deed over their lands, ostensibly for a temporary period. “This scam preys mostly on Latinos, because in Mexico they have land grants, but here we don’t,” Dumanis explained. Other scams involve taking money to find renters for a property. The latest round of scams involves lawyers who ask for hefty fees in advance, she added. The D.A.’s office now sends letters to all property owners who have received eviction notices, warning them about such rip-off schemes.

Internet scams and identity thefts are also on the rise, the D.A. said. “Every time you think you’ve seen everything, you see another.” Even a deputy D.A. who specializes in ID theft was victimized, Dumanis noted. Her office has conducted proactive searches without warrants of past offenders. “You’d be amazed how many credit cards and IDs they have,” she revealed.

Valerie Harris, president of the Rancho San Diego-Jamul chamber, revealed that she was also stung by a criminal who changed her address through the Post Office. “All of my mail was accessible to the criminal,” she said.

The D.A.’s website (http://www.sdcda.org/) now has information to prevent identity theft, as well as steps you should take if you have been victimized. Dumanis advises shredding all personal information and never putting bills in your mailbox, where thieves often steal personal information.
Another area where the D.A.’s office has been cracking down is workers’ compensation, including fraud committed by both employees feigning injuries to collect benefits and employers that fail to pay their workers’ compensation premiums. A new ad targeting employers warns, “Commit worker’s compensation fraud: Get a new outfit” and shows a photo of a prisoner in prison jumpsuit and handcuffs. Her office has also gone after healthcare providers who submit fraudulent claims.

Dumanis said her office has been successful in collecting more than $3 million on bad checks under a new program to help small businesses recover funds from bounced checks. The D.A. also took credit for helping to pass Jessica’s law, a measure that makes possession of child pornography a felony. In addition, she praised the accomplishments of a gang task force.

The D.A. criticized the state Legislature for looking at releasing prisoners to ease prison overcrowding instead of looking at other alternatives. “How can we look at a short term way to save dollars without looking at the long term cost?” she asked, adding that locking people up without giving them tools to change their lives upon release is not the most effective way to reduce crime. She called for rehabilitation programs, transportation to make sure released prisoners go to an appropriation location, and monitoring of recently released offenders.

“We’re going to look into that to see what the laws are, and whether that should be changed,” Dumanis said.

Her office also does community outreach. For example, a new program for college students teaches women how to avoid date rape and warns offenders that such cases will be prosecuted.
Asked about hate crimes prosecution, the D.A. said that prosecuting hate crimes can be difficult and clarified that use of racial slurs alone does not prove hate motivation. Her office has prosecuted 91% of cases in which hate crimes were alleged, she said.

For all crimes prosecuted since Dumanis took office, the conviction rate has been maintained at 94%, Dumanis said. But she concluded, “It’s not about conviction. It’s about justice.”