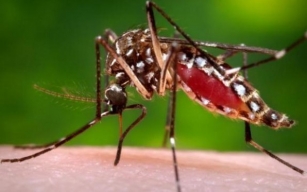 April 4, 2018 (San Diego’s East County) - With mosquito season near, County officials want your help to keep everyone safe from illnesses such as West Nile virus and Zika.

At a press conference on Tuesday, County Supervisor Greg Cox urged the public to follow the “prevent, protect, and report” mantra.

Prevent mosquitoes from breeding by dumping out standing water, both inside and outside homes.  Mosquitos can breed in even a thimbleful of water, so be sure to empty water from flower pot saucers, rain gutters, toys and other items.

Protect yourself from mosquito bites by wearing insect repellant and clothing to keep arms and legs covered.

Report mosquito activity and dead birds, which can be tested for West Nile Virus, to County Vector Control.

While the overwhelming majority of people who get infected by both West Nile virus and Zika never suffer any symptoms at all, both diseases have potentially dire consequences.

In rare instances, West Nile virus can make people extremely ill and even kill them. Zika has been linked to a severe birth defect. Pregnant women who become infected with Zika can have babies with microcephaly, which leaves infants with smaller brains and skulls.

West Nile virus is spread by native Culex mosquitoes after they bite an infected bird or animal.

Two species of invasive Aedes mosquitoes first found in San Diego County in 2014 and 2015 are potentially capable of transmitting Zika and tropical diseases like dengue and chikungunya — but only if they first bite an infected person.

Because those tropical diseases do not exist naturally in San Diego County, invasive Aedes mosquitoes could only transmit Zika and tropical diseases if they first bit a person who contracted the disease elsewhere — travelers returning home infected from abroad.

To date, no invasive Aedes mosquitoes have tested positive for Zika or other tropical diseases in San Diego County or California – and county officials hope to keep it that way.

The County’s Vector Control Program uses helicopters to drop granular larvicide that it says is harmless to people and pets, but kills mosquito larvae. These drops have been used on 48 local waterways, with hand-treating of other areas.

If you have a pond on your property, the County will also give you free mosquito-eating fish.

Zika was practically unheard of before 2015, when it raced through the Western Hemisphere, prompting the World Health Organization to declare it an epidemic. In 2015 in San Diego County, just two people tested positive for Zika, having become infected while traveling. That number skyrocketed to 83 in 2016, and County Vector Control hand-sprayed 10 neighborhoods over the course of the summer and fall to prevent invasive Aedes mosquitoes from biting infected residents and potentially spreading Zika.

In 2017, the number of traveling San Diego residents returning home to test positive for Zika dropped from 83 to 20.  But the Aedes mosquitos have been found in traps across the county, including numerous locations in East County.

So public health officials say the public in our region needs to remain on guard.