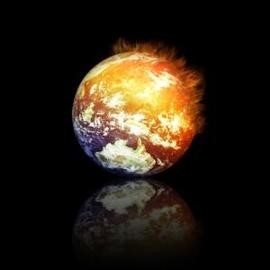 November 6, 2017 (San Diego’s East County) - A new Climate Science Special Report, part of the fourth national climate assessment, concludes that it is “extremely likely” that human activities are the “dominant cause” of global warming, NPR reports.

The study is the most comprehensive ever conducted on climate science by American government researchers, and includes experts from NASA, the National Oceanic and Atmospheric Administration, the Department of Energy and academic scientists.

The report finds that the last 115 years are the warmest in the history of modern civilization—and that greenhouse gases from industry and agriculture are by far the biggest causes.

The report was mandated by Congress before President Donald Trump took office – and the findings flatly contradict the Trump administration, which has consistently denied that climate change is real or that human activities are at fault for the increasing dangers posed by climate change.

Trump has appointed climate change deniers to key positions including the heads of the Environmental Protection Agency and other key departments.  Trump has also said he wil pull the U.S. out of the Paris climate accord.

The report predicts warming will get much worse without action to dramatically cut greenhouse gas emissions.  The future will fuel more severe wildfires here in the west, worse storms elsewhere and rising sea levels already faster than in the past three millennia.

It appears unlikely the report will spur any immediate action by the Trump administration. The President has failed to appoint anyone to fill a vacancy at the top of the Office of Science and Technology Policy – the agency to which the climate report has been submitted.