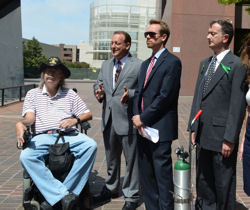 The medical marijuana clinic is the only such facility operating legally under state and local laws in San Diego County. But now the federal government, which has never legalized medical marijuana, seeks to deny California patients all access to medical marijuana locally—and force a court battle over state rights.

According to attorney, Lance Rogers Esq., with Burkhart and Larson in Rancho Santa Fe, this is a case that should be “handled at the state level,” since medical marijuana is legal in California under a ballot initiative approved by voters.  Speaking at a press conference in downtown San Diego today, he added that closing this facility would force patients, who get marijuana legally right now to resort to the black market. “They have exhausted all other means of access.”
The facility is licensed by the San Diego Sheriff’s Department. It’s operations are checked by deputies every thirty to forty days, and all is run openly and in a transparent way. According to the court filings, the facility also serves Riverside, San Diego, Imperial and Orange County. Per the filings, “Mother Earth receives referrals from physicians and well-established institutions throughout the county. These medical institutions include Kaiser Permanente, Sharp HealthCare, Scripps, and USCD Oncology Department. If no stay is granted, there will no longer be a licensed faulty in the County where these physicians and medical institutions can refer clients.”
According to Rogers, the fate of this institution lies in the emergency stay, which should be decided upon in the next 24 to 48 hours. His clients are also prepared to appeal to the California Supreme Court, and if need be, the Supreme Court of the United States (SCOTUS).
Rogers also said that “the whole issue is between the federal government and the state governments.” U.S. Attorney Laura Duffy has over reached by threatening to take away the building from Whig, the renters to Mother Earth, he contends. Moreover, this facility is the gold standard in following the rules and regulations established by the State of California for a facility of this type.
The case stands poised as a landmark state’s rights issue. Since “every seed is tracked from seed to patient,” the U.S. Attorney’s office is using a very expansive use of the Commerce Clause and would mean that local and state governments cannot really rule themselves.
Bob Riedel, owner of the clinic, said that the clinic has support in this from U. S Congressman Bob Filner (D-10), current candidate for City of San Diego Mayor. In a letter to US Attorney Duffy from Congressman Filner’s office, dated July 13, 2012, the Congressman wrote, “I understand that you have a duty to enforce federal law, but hope you will keep in mind the will of the voters of California.”
U.S Congressman Duncan L. Hunter (R-53) and U. S. Congressman Brian Bilbray (R-50), together with Supervisor Susan Jacobs, have visited the facility and agree it complies with the law, owners have stated, adding that the officials know that “this is for the people and by the people.”
The facility is 1000 feet from any children, and provides the Sheriff's Department with a profit loss reports every thirty to forty five days. Moreover, their license was renewed by the San Diego Sheriff’s Department on July 1, indicating all rules have been complied with by the clinic’s owners.
“Uncle Bog" both a volunteer and a patient from the clinic,told ECM that he uses Medical Marijuana to treat his Muscular Dystrophy and chronic pain. He is both a patient and a volunteer. “It’s crazy,” he said. We’re all patients, what am I supposed to do? Go back to opiates?” 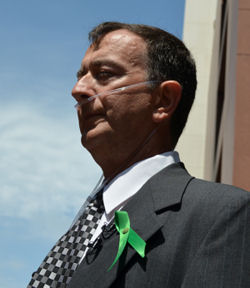 View Linville uses medical marijuana for Emphysema. He says it helps him breathe better, and he is still attached to a portable oxygen tank. He added, “This is the only permitted legal place in Southern California.” He fears that if this legal and safe source is taken away, he will have to go into the underground market, and put himself in the hands of dealers.
According to Rogers this is not good policy and it makes it dangerous for both patients and the rest of society. 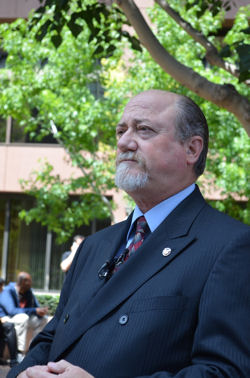 After the first press conference was over John Rodman, Executive Director for Californians for Drug Free Youth (CADFY) came in support of U.S Attorney Duffy.
Their written statement reads in part, “Community groups from around San Diego Metro Area stand in support of U.S. Attorney Laura Duffy today in support of her enforcement of Federal Drug Laws.”
During the short interview ECM asked about a challenge all the way to the SCOTUS. Rodman said that he was not worried since the Supremacy Clause and The Controlled Substances Act would prevail, even if the case went to the SCOTUS.
Rodman also stated that the dispensary is violating Prop 215, which says that people can get together into a collective, but cannot have the sale of the drugs from a dispensary. The written statement also reads in part, “It is clear that cultivating, transporting, possessing, selling and using marijuana violates federal law. So called “medical marijuana dispensaries” are violating both state and federal law, and are making huge profits as evidenced by recent IRS investigations,” the group’s statement read.
In the end, according to the legal filing. “Mother Earth will suffer extreme hardship if the stay is not granted.” Effectively, the only medical marijuana clinic in our County would be forced to close its doors permanently.