The parade, which was saved thanks to generous community donations, will begin at 10 a.m. on East Main St. at the corner of Magnolia Ave., traveling east to Second St. Fans arriving early can join a 9 a.m. red carpet review at Prescott Promenade (200 E. Main St.), where parade grand marshals—the World Series champion Park View Little League All Stars--will be welcomed, along with some members of the 1961 and 1957 La Mesa/El Cajon Little League All Stars.  Additional special guests - Actor Adrian R'Mante, who plays Esteban on Disney's "The Suite Life of Zack and Cody." See members of the military, and a Black Hawk Helicopter. 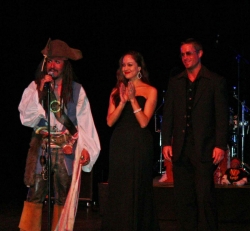 “About San Diego” news reporter Ken Kramer will join Monica Zech, Public Information Officer for the City of El Cajon will serve as announcers for the parade. The parade also features a pirate ship with San “Captain Jack” Sparrow (celebrity tribute artist), the Mother Goose Queen and her court, Mayor Mark Lewis, Chula Vista Mayor Cheryl Cox, marching bands, and firefighters from numerous departments. At the end of the parade, Santa Claus will herald in the start of the holiday season.

New this year: At the Prescott Promenade there will be a "Mother Goose Village" featuring a variety of food vendors and a large Lego play area for children.

This year's parade was nearly canceled due to lack of funds--until Mayor Lewis invited local celebrity tribute artist Sam "Captain Jack" Sparrow to commandeer a City Council meeting and takeover the helm, urging the community to pull together like a pirate crew and save the parade.  The efforts proved successful, much to the delight of children and adults who opened up piggy banks and checkbooks to save the parade. Corporate sponsors, including Cox Communication, also helped fund this year's event.

Roads closures begin at 7:00 am and conclude at approximately 2:00 pm. Please be advised that traffic in the area of the parade is going to be very heavy. Please plan accordingly to avoid long delays. Arrive early for parking. The following roads will be closed:

Captain Jack looks so much like Johnny Debb in Pirates of the Carribean. Mother Goose Parade is indeed the largest parade in San Diego County and the largest of its type west of the Mississippi. One of the most colorful and exciting event which includes people from all age groups. I just went through some pictures of the 2010 Mother Goose Parade and it was so refreshing. Awesome event!

Couldn't be there but hope the parade is going well today! Looks beautiful in the picture above.