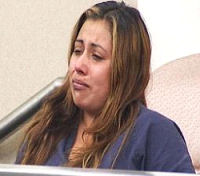 The defendant cried ias the judge heard evidence, ECM news partner 10 News reported. She is charged with gross vehicular manslaughter, felony child abuse and driving under the influence. If convicted, she could face over 13 years in prison.

She is also charged in a November 2011 hit-and-run accident that injured two people.

According to testimony, the family had been at a picnic where Hernandez consumed several beers, as did Eric Figueroa, father of Giuliana. Figueroa was in the passenger seat when the accident occurred.  The two adults attempted to rescue the children in the backseat, but the youngsters were declared dead after being transported to a hospital.

Hernandez said she swerved to avoid a rock in the road, causing the vehicle to veer off into the water.  For more details see http://www.10news.com/news/hearing-set-for-crash-that-killed-2-girls