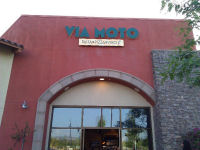 June 21, 2011 (Santee) -- The Via Moto restaurant is now in Santee.  A  grand opening was June 15 for the 4,400-square-foot Via Moto restaurant in The Marketplace in Santee, California. According to Michael Pirraglia, owner and restaurateur, Via Moto is a new Italian dining concept that will feature an express section where diners can order at the counter, a full service bar and dining area for table service, and a vast selection of local and draft beer at the indoor/outdoor bar. The restaurant will be open daily from 11 a.m. to 10 p.m. in The Marketplace, at Mission Gorge Road and Carlton Oaks Boulevard.

Via Moto builds upon a fine fast-casual concept pioneered by The Pirraglia Family called Pasta Moto.  Pirraglia, whose family also owns Tuscan Oven and Tavola Italian Kitchen restaurants in Northern California (Marin), New York and Connecticut, said he saw the need for the concept while traveling on business in 2004 and craved quick, delicious Italian food.  They opened the original Pasta Moto in 2006 in San Francisco to serve high-quality Italian food at an affordable price. He is planning to open another Via Moto in Westfield’s UTC this November.