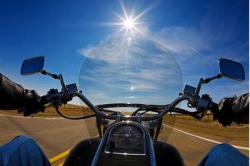 November 22, 2013 (San Diego’s East County) – Drivers of a motorcycle and a Saturn car have both been transported to Palomar Medical Center after colliding on State Route 78 east of San Felipe Road at 11:20 this morning.

A man from Canada was driving his 2006 Harley Davidson motorcycle eastbound at 35 to 40 miles per hour entering a curve when he crossed the center line, overturned, and collided with the Saturn, which was traveling in the opposite direction. The Saturn’s driver is a woman from Borrego Springs.

The motorcyclist suffered a broken ankle and laceration on his face. The Saturn driver complained of chest pains, according to Officer Kevin Pearlstein at the California Highway Patrol.