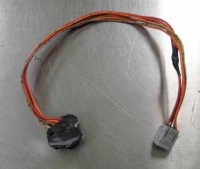 December 27, 2010 (San Diego) -- Professional motorcycle thieves are using secondary ignitions and altered motorcycle ignitions known as “pigtails” as bypass devices to steal sport motorcycles throughout San Diego County. A pigtail acts like a picklock, enabling a thief to steal a bike in less than 20 seconds.

On January 1st, a new law takes effect which makes it a misdemeanor to possess any device or specialized tools designed to bypass the factory installed ignition of a motorcycle.

Violators face up to six months in jail and fines up to $1,000 under the measure, AB 1848, which was authored by Assemblyman Martin Garrick (R-74th district).  Local auto theft investigator Anthony Molina with the Chula Vista Police Department, and Deputy District Attorney Michael MacNeil were also instrumental in getting this law enacted.

According to the insurance industry, the cost of a stolen motorcycle averages around $9,000 per claim. These costs are often passed on to consumers in the form of higher rates.

There are more motorcycles stolen in California than any other state. During the first 10 months of this year, more than 5-thousand bikes were stolen in the Golden State; that translates to $45 million in insurance claims this year alone.