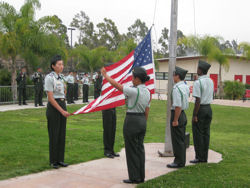 May 26, 2012 (San Diego’s East County)--The Mount Miguel High School JROTC Memorial Day Ceremony on Wednesday, May 23, paid tribute to all of the men and women who have fought and died to protect our freedom as well as those who are presently serving our country.
The program began with Battalion Executive Officer Cadet Major Ella Cabreros providing a brief history and understanding of the significance of this important day. Throughout the years, Memorial Day has been celebrated on different days and in various ways. It typically occurs on the last Monday of May and is celebrated to honor all of the men and women who served in our nation’s Armed Forces and courageously gave their lives for our country.
The program included performances by the school band with the playing of Reveille, followed by the National Anthem as the flag was raised. 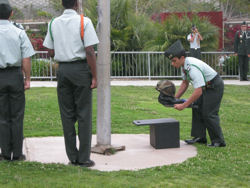 Originally, Memorial Day was named “Decoration Day,” because it was marked by parades, memorial speeches, ceremonies, and the decoration of graves with flowers and flags. In honor of this tradition, Cadet Master Sergeant Guillermo Martinez placed an American Flag, a helmet, and a pair of boots at the base of the flag pole. He then slowly saluted the flag as a symbol of respect and honor to those who have served and sacrificed their lives for America’s freedom.
The ceremony closed as the flag was lowered as To the Colors and Taps were played. The Grossmont Union High School District is very proud and pleased with the display of honor exhibited by our Mount Miguel JROTC students and staff.