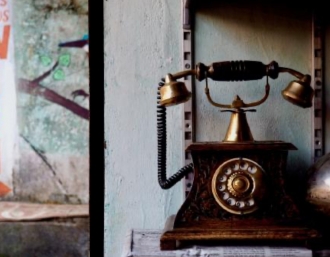 Photo by Toby A. Cox

December 9, 2019 (San Diego’s East County) -- I would like to jump into some crazy stuff, but I feel like you’re just getting to know me; the satire and controversy can wait. I want  to build a foundation, but I first need to define my mind. I have an analog mind, and the only way to really define it is against a digital one. The best way to understand the difference between analog and digital is that analog is based on infinite gradation whereas digital is all 0s and 1s. A wave can have an infinite amount of unique points. A 0 or 1 cannot. They are either 0 or 1. There is no in between.

Analog thoughts are ever changing, adapting, unstable, and infinite. Digital thoughts are concrete, substantial, unforgiving, and ultimate. An analog thought might be as cliche as, “beauty is in the eye of the beholder” or as multidimensional as sonder. (Sonder, n. The realization that every living person lives a life as uniquely complicated as our own.) A digital thought is a statement, a claim, a foundation. Murder is bad. Compassion is good. Mashed potatoes are better than fried. They provide stability to build upon. They are hard rules. They are walls. They are pillars.

We need pillars, no doubt. A completely analog world is one in which people float around in total whimsy. They are lost in the perpetual swirling of the universe with no anchor, no reference point, and no ground to stand on.

But we also need to crush pillars that are no longer useful. Racism was a pillar for a society that valued profit over humanity, hierarchy over equality, and prejudice over justice. The society fabricated a “scientific” justification. Fortunatelysociety adapts (unfortunately always too slowly), and in our 100,000 year human history, we can see the humbling amount of examples of those shameful and horrific pillars lying in the rubble.

I don’t plan to take on anything as complicated as prejudice because I simply don’t understand it well enough. I only aim to look at the very basic thought process that can enable these types of thoughts. Digital thoughts unbalanced by Analog.

“This is the problem with America right now.”

After my prologue, my logic should be clear. Yes, there are many problems with the world right now, but there isn’t a “single” problem. Good and Evil aren’t as linear as 0s and 1s. Is the starving man stealing food for his children simply evil? Is the generous donation of a business tycoon simply good?

But generalized thinking can be very seductive. Isn’t it freeing to just stop thinking about everything and reduce the complexities to 0s and 1s, and be done with it? Do we really need to break down every thought and put it on a wave and see it in all of its complexity? Probably not. However, we do need to analyze the 0s and 1s that have the potential to harm others.

If you don’t like leather and prefer cloth, then fine. If you like chicken but hate pork, great. But if you don’t like young people because they spend too much time on their cell phones, then you are cutting yourself off from others. And that’s the most dangerous aspect of Digital thinking in a digital era. We can draw an infinite amount of lines in the sand by dividing everyone into 0s and 1s. The seductive part is that no matter how many lines we draw, we don’t feel alone. If you want to be a crypto-Maoist steampunk, then you can find enough of those somewhere online to feel at home. And that’s great in the sense of community, but it’s awful in the sense of a physical community where we must interact with all kinds of people, not just those that are preapproved 1s.

This is all to say that this has been a Digital exercise in defining Analog. All people don’t think in terms of “either/or,” because that misses the whole point. We all think in “but/and” in that we all don’t think in any singular way. The beauty of contradictions is that they exist. We are not solitary units with mathematical computers in our heads. We are social animals stuck in a cardboard box trying to figure out the best way to get along. Pretending we’re on our own isn’t going to help anybody, it’s just going to annoy everyone else.

In sum, there is no singular problem with anything because there is no singular solution to anything. There are of course more ways to think than simply Analog or Digital but I’ve selected these two points on my spectrum, which contains an infinite number of spectrums all nested within each other like a great cosmic Russian doll.  We need our structure and our rules and our guidelines, but we also need to step down from them once in a while and check for cracks and chips. That’s where you’ll find me: climbing down from a pillar as soon as I realize it is one. I’ll be making sure it’s one I want to keep, and not one made of plaster, ready to crumble and bring me down with it.