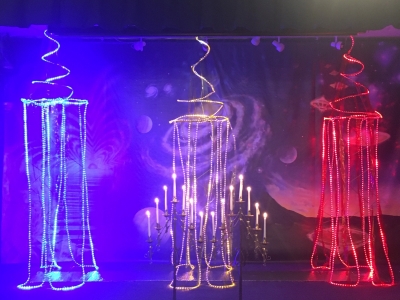 By Jake Zawlacki
January 14, 2020 (San Diego’s East County) -- You may have spent your New Year’s Eve getting drinks, watching a big plastic ball drop, or looking at fireworks. I didn’t. I brought my New Year in a little early, on December 29th. And it arrived in three steps, in a separate dimension.
First, my astral body walked through blue flames, my many negative life experiences burning like kindling.
Next, my body walked through yellow flames, the many positive attributes cultivated over a millennia of past lives rejoining my earthly self.
And finally, I entered rose flames. The soft licks of the flares preparing me for the challenges of my future lives, strengthening me for millennia to come.
My astral body walked through these flames in a palace of crystal, my earthly body walking through mere representations on our own physical world at the El Cajon headquarters of the Unarius Academy of Science.
For the unfamiliar, the Unarius Academy of Science was founded in 1954 by Ernest and Ruth Norman. First located in Los Angeles, the Unarius headquarters was established in downtown El Cajon in 1975. The basic premise of Unarius is that souls are immortal. Because they are immortal, we are able to commune with the past lives of those souls. Unariuns promote compassion for others and creativity through their weekly past-life therapy classes and hands-on creativity workshops.
Some Unariuns believe in a slew of other things, almost as far-reaching as zombie gods, blue gods with a thousand faces, and a god that seems to plague nonbelievers just for the fun of it. But we won’t get into that. The basis is love, as cliché as that sounds.
I had emailed the Unarius Academy of Science to attend their Flame Ceremony because I was curious. I was curious how such a piece of prime real estate was dedicated to this practice. And I was curious about the people who had a landing pad in the middle of Lawson Valley. I was curious, and very skeptical.
And then I entered. Six women in goddess white robes stood at the front of the room. A semicircle of chairs faced the curtained stage with a handful of middle to later aged people sitting and standing. I looked at the bright paintings, the ionic columns mounted against the walls, and the model replica of the crystal city that was to be created on Earth. I shuffled through books ranging from the true life of Jesus of Nazareth to the real meaning behind the Mona Lisa. And then I sat down.
The ceremony began with a short introduction. We walked through the flames with our astral and physical bodies, and then sat down with a newly acquired rose and candle. The large candelabras at the front of the stage were lit and the women to each side of them passed their flame to the seated person next to them. That person passed their light to the next, and so on. The voice of Ruth Norman, having long left this dimension for another, surrounded us. She told us the significance of our flame, and how we must cultivate our own in order to pass it on to others. And it was over.
As I sit at my desk with the Unariun provided rose in a glass vase, I hold that meaning to heart. We must cultivate our own flame, in order to help others cultivate theirs. Aliens or not, I like it.
I was prepared to rip this whole place apart. Some not-so-fresh meat for me to cannibalize into an article, but I’ve had a change of heart. I’m not a Unariun, nor do I plan to become one, but shouldn’t we do more than just tolerate or scoff at those who spread love and positivity? Shouldn’t we support it? Champion it?
It clicked for me when I stood at the bottom of the steps of the stage and looked up to an older man standing in a ring of blue hanging LED lights with his eyes closed and his hands crossed at his belt. He didn’t show an ounce of stress in his face, nor inhibition, worry, or pain. If it works for him, shouldn’t that be enough?
And that’s my Unarius inspired resolution. To cultivate my flame. To help others to cultivate theirs. To never snuff another.
What’s yours?