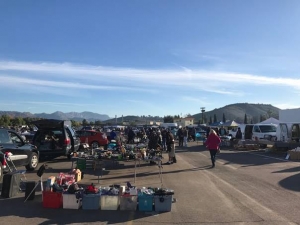 December 30, 2019 (Santee) -- As we are all in the thick of holiday magic, I‘d like to write about the most magical place in East County: The Santee Swap Meet. I’ve been swap-meeting since my youth, and I’ve never spent a dull morning walking the wide aisles of other people’s junk. For the uninitiated, the Santee Swap Meet is located on the same premises as the Santee Drive In. Cost of entry for buyers is $2 and the cost for a space to sell is $28 on Saturday and $35 on Sunday.

The Swap Meet is a relic of a forgotten era. Sure, there’s still Spring Valley and Kobey’s going strong, but most sellers there are vendors importing crap from China or India or Mexico and selling it for profit. It’s a full-time job. The Santee Swap Meet is not that place.

The average buyer of the swap meet is a white, middle to later aged man who’s looking for industrial, outdoors, or mechanical stuff. But that’s not indicative of the diversity that the Santee Swap Meet brings in. In my casual peregrinations I’ve heard Spanish, Farsi, Arabic and Thai in hushed voices discussing the price of some worthless object. Plenty of English discussing the same. I’ve seen the interactions of people whose lives would have never crossed had it not been for an old bicycle, a couple of used pairs of socks, or some sunglasses. It’s easily the most diverse place in our county.

But it’s all about the hauls. My best score is as follows: Sitting in my decaying lawn chair, I was selling the usual junk: old sports equipment, car parts, and spare books. My neighbors had a similar spread of stuff next to me, with the exception of a box of old leather-bound books that caught my eye. Now, there are plenty of old books at the Santee Swap Meet, most of them absolute garbage, so I thought nothing of it. I had enough at home.

But my neighbor sellers left, and in true swap meet fashion they left a pile of junk they didn’t want to take home. I noticed those same books sitting in the box and asked my brother to grab it before the rest of the vultures swooped in. He did, and we found a complete set of Jules Verne novels from the early thirties. The lack of bartering, of measuring the cost vs. gain, of lugging around the books is by no means representative of the majority of my transactions at the swap meet, but it’s my best example of how someone’s actual trash can be worth around $200 on eBay.

That’s a part of the fun for me anyways. The other part is just having a reason to get up early Sunday morning to walk around the rolling waves of asphalt with my father looking for something I didn’t know I wanted. It’s a wholesome experience (as long as you can turn a blind eye to the aforementioned items) and it’s something that continually surprises and starts conversations. Of course, there are the jerks selling fakes, paying with high quality counterfeit bills, and looking to keep more than sell, but it’s uncommon.

The magic in the hallowed ground of the swap meet lies in the people walking amongst it and the objects on the ground and tables that can pull us together for brief moments.

“How much you asking on that welder’s helmet?” I ask, intrigued by the custom helmet in the shape of a skull with gold painted canine teeth.

“You got it.” I hand him a twenty-dollar bill, he hands me a five back, and I grab the helmet knowing exactly where on the garage wall it’s going to hang. It’s been starting conversations ever since.

The Santee Swap Meet is one of those rare places for everyone. The kids can find comic books and toys. The workers can find high quality tools and equipment. The literati can find their books and art prints. Everyone can find something they weren’t looking for.

Maybe the crowd can be a little rough around the edges, a couple of expletives and the occasional rated R merchandise among the populace, but everyone’s getting along. Because ultimately, we just want to make a deal with you, everything else be damned.

Me and my Dad had a favorite place in the desert we visited to collect agate and petrified wood. We called it Ogilby but it was miles from the site of the town of Ogilby. My Dad collected woodworking tools, especially Stanley planes. We began going to the Yuma swap meet held at the dog racing track where he found many old hand tools that came from Mexico. I still have some of his tools including a plane priced at $ 135.00, the 1970's price.