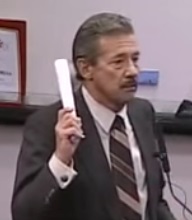 By Jake Zawlacki
File photo: Peter Carzis, speaking at a 2015 La Mesa City Council meeting
January 23, 2020 (La Mesa) -- The night I heard of Peter Carzis’ arrest, I was shocked. I was shocked because I had often gone to Peter’s Men’s Apparel, his eponymous men’s clothing store in La Mesa, and had always known him to be a kind man. He had reminded me of the old Hollywood-type black and white movies with their pressed suits and greased hair and salesman type of smile. He was cool in the old sense of the word.
Months before I prepared to live abroad for two years, I entered his shop with a purpose. I needed clothes that could pass the test of foreign school officials and perhaps the occasional U.S. ambassador visit. Peter met my expectations and helped me create my own sense of style, pink paisley tie included. So when I saw the recent videos of him attacking camera people and reporters, and indulging in allegedly lewd public acts, I was shocked. I was shocked to hear the horrors retold by local business owners. It wasn’t the Peter that I had met years prior. But this is a point in which I must depart from Peter and delve into my own life.
Unfortunately, I have witnessed two people whom I loved dearly lose their minds. That’s the crass way of putting it. They had psychological breakdowns. The first was a close friend who in his early twenties, found his way into my garage uncontrollably weeping, with a machete in his hand. Nobody was hurt in the physical sense, but it was the beginning of a long journey to what we can now consider a regulated behavior. The person is doing excellent as of today, but it wasn’t without a cost.
The second person was my grandfather, my childhood idol. He decided to deal with his cancer by not treating it because he never wanted to end up as a bald and shriveled old man. The prophecy, however, like all prophecies, proved true.
Dementia isn’t easy to figure out, but in the case of my grandfather, there were distinct moments when he was no longer himself. He once walked into the kitchen and said, “I just called your aunt and cussed her out.”
“Why?” I asked.
He stopped and looked at me and furrowed his brow. “I don’t know.”
Moments like this were common in the last six months of his life. He would flip all the time. People he hadn’t talked to in decades became his closest of friends, his supportive family became the most savage of enemies. But somehow I remained. He was kind to me for whatever reason, without a cross word to say or a tirade to exhibit. We often sat and talked about nothing.  More often we sat and didn’t talk at all.
When I heard about Peter’s arrest I immediately wrote to my editor at East County Magazine, Miriam Raftery, asking for advice on how to write about a situation such as this. She responded quickly with a thorough analysis, approving of a sensitive handling of the possible age-related mental issues. She also asked a question that brought all these memories back: what might have happened if Mr. Carzis had a gun or a knife, or if police had arrived and he'd failed to follow their orders? And I knew. I knew what could happen because I had seen it happen before.
My grandfather walked through the house with a small handgun. His friend called to him, “Hey, what are you doing?”
“Don’t try and stop me. I’ve got to do this.” And with the gleaming gun in his hand, he walked out the door. Sitting in his truck in the back mountains east of El Cajon, he fired his black handgun into his throat in an attempt to dislodge the sludge black tumor that had been growing there. Or maybe it was an attempt to die as himself before he became a bald and shriveled old man.
But he wasn’t himself. Something had clicked or snapped or broken. It was like an automatic transmission that wasn’t shifting right. Sometimes he was in first gear when he should have been in fifth. Sometimes he was in no gear at all.
He survived that bullet wound, his flesh scarred and wounded, but the untreated cancer persisted in his remaining weeks. The tragic prophecy concluded, and he died the very shriveled and bald man he feared. Irony in the deepest sense of the word.
This is a long answer to a short question. What would have happened if Mr. Carzis had a gun during the altercation? The Peter I had met long ago would have done nothing, would have never been in the situation, but the Mr. Carvis of today could be a roll of the dice, or the shifting of a gear.
I don’t know how to end this article because there isn’t really an ending; mental health doesn’t just end. My grandfather lives on in my memory every day of my life. And despite my friend’s brilliant smile of today, I can’t help but see a glimpse into that abyss-like past.
I’m not drawing any conclusions of how or why Mr. Carvis has acted the way he has over the past few years. All I can do is draw parallels, render my own experience, and fight against the urge to grab the pitchfork. We as a community are not perfect, but we can strive to help those in need, to be mindful of other’s circumstances, and to do everything we can to support those around us, even in the most difficult and direst of conditions.

The point of the story was to discuss mental illness and cognitive decline, encouraging family members and friends to be watchful and intervene to get help for seniors or people of any age when something has obviously changed in their demeanor and behavior to signal that they need help.

There were some people on social media urging direct confrontations after an outburst of erratic behavior by Carzis, and I had posted to caution against that and instead working with police to take action, since nobody knew if Mr. Carzis might have access to a weapon.  Jake unfortunately lost someone he loved to a self-induced gunshot.  Neither of us called for a ban on gun ownership.  I ask commenters to please stick to the topic at hand.

at how the Liberals can turn any tragedy into a potential opportunity for a gun grab. Molon labe.