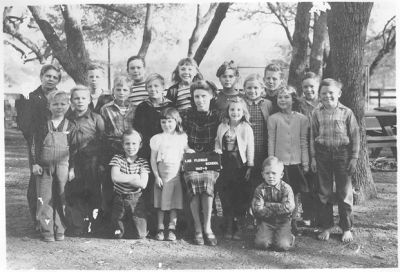 November 25, 2019 (Jamul) -- “Mountain child” is a term I first heard when looking at a class photo of my grandfather. In the small Lyons Valley elementary school of 1947, he stood amongst two of his sisters, he and the youngest with a particularly stern face.

“Look at them. They’re like wild mountain children,” my Dad said, smiling at the black and white photo. It was true; they looked more like children of the corn than civilization standing in the dirt, some with bare feet. But most looked happy.

My mother was given the photo at my grandfather’s funeral. The elementary school teacher, Fern Bowen, age 95, had seen his name in the obituary and recognized him as a student of 63 years before. She made her way to the El Cajon Mortuary and handed the photograph to my mother. She remembered being worried about my grandfather and great aunts and seeing their facial expressions at their young age; I might have been a little worried too. Or I might have chalked it up to them not liking photographs too much.

I came to use the term “mountain child” when hiking in Icebox Canyon outside of Las Vegas a couple years ago. My friend, a local resident of Henderson, Nevada, and I decided it was time for some fresh air, so we got away from the neon lights and the money and walked off into the canyon. On the trail I kept losing him, hearing stumbling rocks and shoe skids behind me as I walked. I waited for him to catch up and then silently bound off, repeating the trend over and over. I wore Vans slip-ons, a favorite of mine for basketball, hiking, car work, and the beach, and he had been wearing actual hiking boots, but the advantage was clearly mine. After a couple more feline leaps across boulders, I turned to him.

“Sorry man, I’m just a mountain child. You were walking up and down the sidewalk to play video games while I was running through brush and poison oak. Different childhoods.”

“Dude, you’re from San Diego,” he said. “Weren’t you at the beach all the time? What do you mean ‘mountain child’?”

“No, no.” I stopped moving to impart the gravity of my coming statement. “I’m from East County. It’s like a different world. It’s the edge of the Southwest.” I thought about the actual divide of the Southwest, and where it ended. I think it’s on the 8 westbound right after the College Ave exit when your hood lowers and you start to descend into somewhere else entirely. It’s the end of the line, the falling off a cliff. Maybe there are some horses and cows and ostriches up in North County, but we all know that doesn’t count.

I’ve been meditating on the term for a while now: mountain child. A child of the mountain in the most literal sense. The mountain in my mind is always Viejas Mountain, the backdrop to my childhood, adolescence, and early adulthood, but there’s more to it than that. There’s the perpetual scrapes of the knee, the broken bones, the sounds of loud engines and whinnies, and the quietness of the Santa Ana winds drowning everything out, embracing you in the dark, a warm memento of their destructive potential. There are the persistent reminders of a mixed California culture: the Mexican heritage immediately preceding, and the Kumeyaay nation before that. And there’s the mixture of peoples from across the world living in El Cajon, on Mollison, the same street my great grandfather had built his house in 1945. The young engineer holding the same hopes and aspirations of our neighbors today.

Thinking of the photograph of barefoot children, I recognize it. I recognize what it is that makes me a mountain child. It’s the little bit of uncleanliness. It’s that desire to walk outside barefoot because nobody actually needs shoes. It’s the faint layer of dust 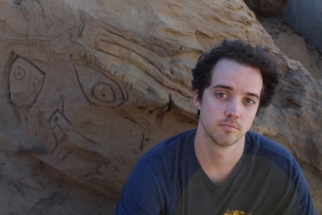 that can never seem to leave my car for longer than a night. It’s the bit of black engine grease under my fingernails that has become bound to my flesh. And that’s where we live. East County isn’t dirty in the way cities are with their impossible stains and grotesque odors. It’s just a little dusty from all the activity going on: the horses stamping in the back, the truck up on jack stands, the high school football teams grinding it out on the field.

That’s where I come from, where a lot of us come from, and that’s the foundation upon which I will write this column. I’ll write it as a mountain child, because that’s the only way I know how.