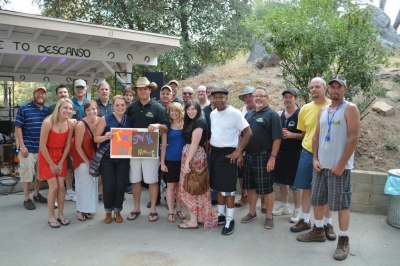 July 21, 2013 (Descanso) Efforts of the Mountain Empire Men’s Club culminated in a demonstration of the maxim “It takes a village to raise a child.”

An outpouring of volunteer effort, donations, and pitching-in from the mountain community of Descanso made this year’s scholarship fundraiser on June 28 event another success. Tammy Cooker and her crew from Descanso Junction and Catering served up a fabulous barbecue dinner of Jack Daniels tri-tip and chicken, while the Blue Mountain Band performed live music onstage at the historic Descanso Town Hall. 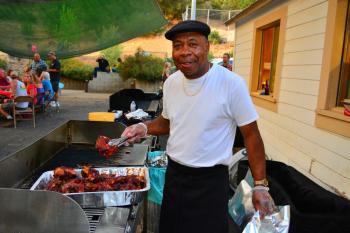 Leon Bullock, a member of the Men’s Club, was hard at work at the barbecue. However, he took time out to tell me that he has been in the Men’s Club for four years. He enjoys helping out the kids in the community, meeting new people, helping with the barbecue, and having fun. Eric Withey was just as enthusiastic. “I like the idea of helping out the kids who are largely neglected by other more populated areas of the county.”

This year at their 5th Annual Scholarship Fundraiser, the Men’s Club had a surprise visit from past scholarship recipients in various stages of their college careers. These grateful students spoke to the Men’s Club and the crowd about what the scholarship meant to them, including a recent graduate of Midwestern University in Arizona. The students held onto a super-sized card that was a kaleidoscope of colored messages of gratitude 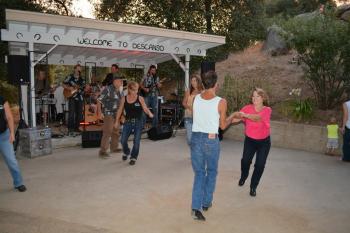 made in different geometric shapes. One student told the Men’s Club representatives, “I really want to express my thanks. It sure made a difference in my life.”

In response, a top representative of the MEMC expressed his thoughts: “We don’t look for the spotlight, but to see the smiles on their faces and supporting their education is what it’s all about. Thank you all from the Men’s Club.”

The Men’s Club awarded $18,000 to twenty scholarship winners this year and $20,000 last year. In 2012, the Mt. Empire Men’s Club donated over $25,000 in the form of academic scholarships and monetary donations to athletic programs.

The Descanso event is only one of the organization’s yearly fundraising events. Readers may know of Pine Valley Days, but may not know that the MEMC has organized this event for the past 42 years. This year’s Pine Valley Days will be held on Friday and Saturday, July 26th and 27th.

In addition, the MEMC hosts two pancake breakfasts a year for the Pine Valley Improvement Club and coordnates the “Run to the Hills Car Show, in addition to other philanthropic endeavors. If you would like more information about this caring organization, their web address is http://www.freewebs.com/mountainempiremensclub/. They are always looking for new dedicated members.