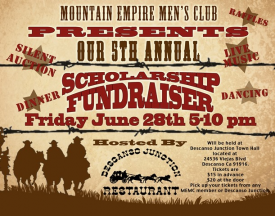 June 26, 2013 (Descanso) -- Get ready to kick up your heels, because there will be live music and dancing in Descanso on Friday evening, June 28, 2013. Mountain Empire Men’s Club presents their 5th Annual Scholarship Fundraiser at the Descanso Town Hall. The newly designated “historical” town hall is located at 24536 Viejas Blvd. in Descanso. The event is from 5-10 p.m.

Descanso Junction Catering is hosting the event and cooking up a delicious smoked barbecue dinner. This special event also features a silent auction and raffle prizes. All funds collected will go directly to the Scholarship Fund for students in the Mountain Empire School District, of which Descanso is a  part.

Mountain Empire Men’s Club doesn’t only give out college scholarships to students in the district. In the past, the orgnaization has helped needy families and purchased athletic equipment, among other charitable donations.

Tickets for the event can be purchased from Mountain Empire Men’s Club members and at Descanso Junction. Tickets are $15 in advance and $20 at the door.

Tammy Cooker of Descanso Junction Restaurant and Catering is also serving up her delicious smoked, original recipe Jack Daniels tri-tip with all the fixins for an upcoming East County Magazine and Viejas Wildfire Alerts fundraiser on August 10th, also at the historic Descanso Town Hall.

To find out more about Mountain Empire Men’s Club, visit their website at http://www.freewebs.com/mountainempiremensclub/.