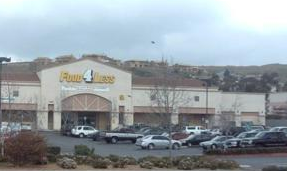 December 24, 2013 (Lemon Grove) – A mountain lion has been sighted in Lemon Grove this Christmas eve morning. “Deputies met with the reporting party, who took a picture of what appeared to be a mountain lion,” said Sgt. Matt Cook with the Sheriff’s Lemon Grove substation.  The animal was apparently lying in the bushes of a vacant lot just west of the Food4Less at 7420 Broadway, the main street through the town of Lemon Grove.

The witness saw the mountain lion at 7:30 a.m. but didn’t report it until nearly 9 a.m.  Deputies searched for the big cat but did not find it.

California Department of Fish and Game was also notified but did not respond.  As a result, Sgt. Cook told ECM, "lethal force would have been used" if Sheriff's deputies had located the cougar due to its proximity to shoppers and homes.  Tranquilizing and relocating is only done when Fish and Game is at the scene, he added.  So be aware that if you call the Sheriff or 911 to report a sighting, the lion could be killed.

Mountain lions are protected under California law and it is illegal for an individual to shoot, trap or otherwise harm one. Mountain lions have been making a comeback over the past decade since they are protected from hunters, though it's unusual to see one in such an urban area.

Rural residents in rural East County have largely adapted to living with the presence of mountain lions, which are elusive and rarely seen.  Attacks on humans are rare but have occurred.  Making loud noises, raising arms overhead, and carrying a walking stick are strategies used by rural residents living in mountain lion habitat. For many rural residents, sighting a mountain lion is considered a rare treat -- not a cause for alarm though efforts may be made to frighten off a big cat that ventures too close to schools or parks.

Mountain lions have been sighted even farther west.  One ECM writer recalls seeing a mountain lion some years ago behind a restaurant in Mission Valley.  Mountain lions can travel a hundred miles or more in a night; one lion killed by a car in Jamul had a radio tracking collar that indicated it had traveled as far away as a beach in Oceanside.

View two recent reports from 2018 and 2019 with information on mountain lions in our region, funded by SANDAG and California Dept. of Fish && Wildlife-Local Assistance Grant funds (see attached).

Too bad they can be shot by virtue of their proximity to humans; threatening behavior seems like a better criteria.