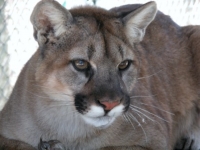 June 9, 2011 (Alpine) - Alpine Community Network reports that an Alpine resident has informed ACN of a mountain lion siting in broad daylight.  According to ACN director Angela Brookshire, ""I received an email this morning from an Alpine Resident who told me that on their way to work at Sycuan Casino at approximately 6:50 a.m. they spotted a Mountain Lion at the corner of Tavern Rd. and Dehesa Rd. in Alpine."

Mountain lions are protected under California and it is illegal to shoot or trap them.  Viewing a lion is considered a rare treat by many, however caution is advised.  Local lions are generally shy and seen primarily in wilderness and backcountry regions, rarely threatening humans. Sightings in populated areas are rare.  However earlier this year a lion was spotted in a tree in downtown Alpine and near a school in Jamul.

Lions are often attracted by easy prey, so it's wise to keep chickens in coops and small pets indoors where possible.  If walking or hiking in an area known to have mountain lions, it's a good idea to carry a walking stick and a whistle.  Pepper spray has also been known to fend off a lion.

Residents are advised to be alert and use caution in the vicinity.  If you know of additional mountain lion sightings, please contact editor@eastcountymagazine.org.

In addition, Paula Dickenson with the Alpine Sheriff's substation asks that if you see a lion in the area, please  contact the Sheriff's non-emergency number, 858 565-5200 immediately, especially if there is an immediate threat to the community. "Last year we received the information days later," she said.

Several residents in Alpine now say that the mountain lion has been in that area for years, causing no problems to people.

We also we received the following comment from reader Danielle Cook of Jacumba:

"Several weeks ago, we had a house guest with a dog. He took his dog out for a stroll around the Jacumba pond (on the dge of town) early one morning and much to his and his dogs surprise, came face to face with a mountain lion. The respective parties paused and looked at each other in astonishment. After a few tense moments, the mountain lion melted into the underbrush. Our house guest cut his walk short!"

In addition, responding to reader concerns, Paula Dickenson with the Alpine Sheriff's substation clarified that Sheriff deputies are concerned with the safety of residents, but do not shoot or relocate animals without justification.  "The situation dictates what action is taken," she said. "It's a fact of life that we live among the mountain lions and snakes and whatever is there in our wilderness. That is why we live here and not in the city."