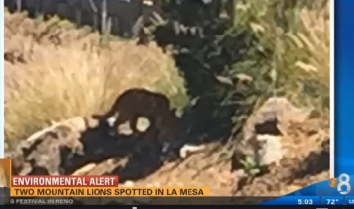 July 8, 2016 (Mt. Helix) – Two mountain lions have been reported Monday by a homeowner on Mt. Helix.  La Mesa Today sent an alert warning the lions were seen  off Lemon Avenue in the Lake Helix area.  A CBS 8 news story ran two photos taken by the homeowner in unincorporated  La Mesa and footage of the location outside the home.

The homeowner, who asked to stay anonymous, said the lions were on a hillside above a pool where her children were playing and two large dogs were present.

A long-time La Mesa resident  posted on a residents’ online forum that through the years he has previously seen mountain lions in the Boulder Hills area of La Mesa near Chevy Chase, above the La Mesa Village.

The resident, who says he has tracked mountain lions, told ECM's editor that lions can produce a musky smell similar to that at the fishing cat exhibit at the San Diego Zoo.

Several years ago,  ECM also had a report of a large cat seeen near Helix Lake.  Recently, another resident reported seeing large cat tracks believed to be a bobcat, though a young mountain lion could leave similar tracks. In recent years, mountain lion sightings have been reported in Rancho San Diego,Spring Valley, and even at a vacant lot next to a Food 4 Less store in Lemon Grove. Like coyotes, the big cats are proving adaptable as their natural habitat shrinks due to encroaching development; drought and brush fires can also force these large cats into more suburban settings.

Mountain lions are normally reclusive and rarely seen. An adult mountain lion can travel up to 25 miles in a night and has a territory of up to 200 miles. While the lions have likely moved on, they could return and it’s a wise idea to keep young children, small pets and chickens indoors or protected at night, when lions are normally most active.

Under state law it is illegal for individuals to kill a mountain lion except with a predation permit if a lion has taken livestock or exhibited aggressive behavior, which these  lions did not, though the homeowner said they seemed unafraid of humans.  To protect these rare wildlife visitors to our region, don’t call 911 or the Sheriff unless there is obvious threatening behavior since law enforcement may respond by shooting the big cats.

Mountain lions main prey animals are deer, which are not normally seen on Mt. Helix, though they will also eat rabbits, raccoons, birds or even coyotes—so the latter may be good news in areas where coyotes have overpopulated.  When prey is scarce, mountain lions may prey on pets or livestock but attacks on humans are very rare. Across the U.S. and Canada, the average is one fatal mountain lion attack per year, National Geographic reports.

Mountain lions normally pounce on prey from behind.  When hiking, carrying a walking stick, bear spray or pepper spray are options for protection if needed. But normally if one startles a mountain lion on a trail, raising arms overhead and shouting is enough to scare it away, as they typically strive to avoid human contact.

Putting lights in your yard, keeping pets indoors at night, eliminating items deer feed on, and securing chickens in a coop impenetrable for mountain lions (also called cougars or pumas) are all options to dissuade the big cats.

Keep cameras ready- at a safe distance—to capture photos if you are lucky enough to see one of the most elusive large animals in North America.