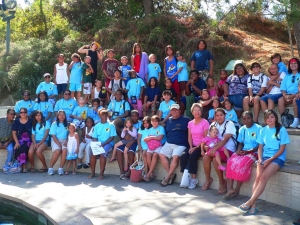 August 16, 2009 (La Jolla) – It was a day filled with education and excitement for Native American youngsters enrolled in Camp Heyaay Coome Kooknumch, which means “The Elders Long Ago Tell Our Stories.”

On an August 3rd field trip sponsored by the Viejas Band of the Kumeyaay Nation, more than 60 local Indian children and teens visited the Birch Aquarium at Scripps to learn about their origins and ancestral history--then headed to the beach for summertime fun complete with surfing lessons.

“The summer program, which started in 1996, began because it's very important for the Tribe that the elders connect with the children and share their knowledge about the ways of the past, specifically their Kumeyaay culture and language,” said Charlotte Ochiqui, program director from Viejas. “Every year they look forward to the program, which started strong and continues to be very popular.” 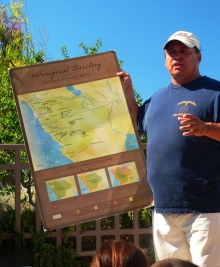 This program really helps bring the kids together and learn about who they are,” said Louie Guassac, tribal historian for the Mesa Grande Band of Mission Indians. “At night, the elders would tell stories, under the stars. This is reviving that tradition. It exposes kids to their heritage, because Kumeyaay existence was very prominent in the ocean areas.” For some, the information is an eye-opener, since in recent generations many youths have lost touch with their roots.

Guassac showed children an aboriginal territory map (photo, right) of the Kumeyaay Digueno Nation in 1775, right after the Spanish arrived in California. “It’s important to you because it is your past and it is your future,” he said. “We’re ocean, mountain and desert people.” He passes 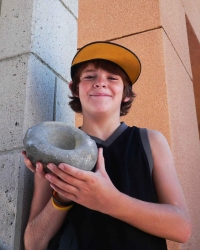 around artifacts used by the children’s ancestors, such as a bowl carved from volcanic rock.

Dr. Patricia Masters from Scripps Institute of Oceanography explained that the ocean was once two or three miles further from shore—and that recent archaeological finds have revealed ancient Kumeyaay villages, now under water.

“La Jolla’s name may be traced to the Kumeyaay name for many caves,” said Masters. “Next to them, there was a very large village where people made a living fishing…Welcome back to your coastal village in La Jolla.” She described how the ancient Kumeyaays built boats out of tule reeds collected in marshy areas, manufactured circular fish hooks from abalone shells, and braved dangerous currents to reach nearby islands, all of which were populated by the Kumeyaay. “Enjoy the richness of the ocean and its resources,” she concluded, “and be reminded of your ancestors.”

Kids ages five and up from the Kumeyaay, Navajo, Seneca, and Santa Ysabel tribes participated in this enlightening field trip, part of a two-week summer program. The Kumeyaay language is part of the Yuman family, which includes 16 languages and extends from the Colorado River in Arizona to the coast. Many adult chaperones and tribal members were also present, providing encouragement and helping with the children.

“The first week of camp, we made baskets and pottery. The second week, we do all the field trips,” said Cilla Grijalva, who has served as a camp counselor in prior years. “We went to the desert and we went hiking last year. We did surfing and kayaking, too.” 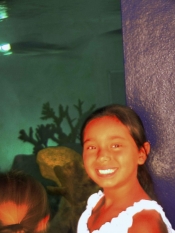 Eight-year-old Silent Rain (photo, right) a former Little Miss Kumeyaay, also attended last year’s camp. “I liked learning how to surf,” she recalled. “My favorite part of the aquarium was the fish, and touching the sea slugs. They felt slimy and squishy!” 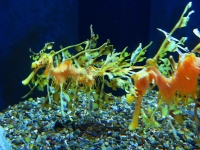 Inside the aquarium, kids exclaimed with delight and wonder at exhibits of sharks, sea horses, eels, jellyfish, sea dragons (photo, left)and much more.

An entire section of the museum is now devoted to global climate change, a field in which Scripps Institute scientists have emerged in the forefront globally. One exhibit invites visitors to enter a broadcast booth and read a script. Silent Rain and her cousin, Cilla Grijalva, giggled as they viewed themselves on a closed-circuit TV screen. “It’s so cool!” said Silent Rain. 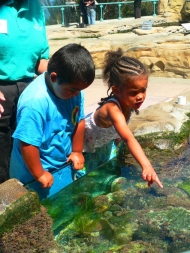 On a patio outside, youngsters touched sea anemones and a sea star described as “sticky” by one child. Four-year-old Kioni Carrizona Lui eagerly peered into a tide pool and focused on catching fish. “They are so fast, it’s really hard!” he exclaimed.

An aquarium employee praised the youth’s inquisitiveness. “You’re going to be a good marine biologist, I can tell.”

“Getting the aspects of Kumeyaay tradition is new for some,” said Christine Foster, a community educator from Viejas. “That’s why this program is extremely essential for the kids.” 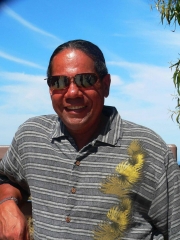 Stan Rodriguez (photo, right), 51, a traditional Kumeyaay singer from the Santa Ysabel Band of Digueño Indians, is pleased to see young people learning about their heritage. “Viejas has been very proactive in educating youth about our land, our language, and our culture,” he said. “This field trip to the aquarium helps to reinforce our connection with the ocean. It takes us back into our creation stories and our traditional songs about our people coming to the ocean, and animals of the ocean such as sea lions which we called sea coyotes…Two of three generations have lost touch with this, and now we want to bring this back. You can’t teach what you don’t know.” He added, “Youth is our most important resource. They are our future and will one day be our elders.”

Leaving the aquarium, we headed to La Jolla Shores for an afternoon at the beach complete with lunch, horseshoe games, and the day’s highlight from a purely fun perspective: surfing lessons. 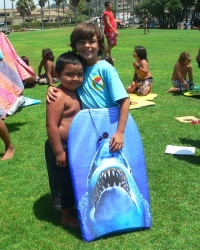 Instructors from Menehune Surf started out with a talk about sharks—including leopard sharks which breed just south of La Jolla Shores.

“What if the sharks eat us?” one of the kids inquired. Instructors reassured everyone that there has never been a shark attack on a surfer in the surf zone in San Diego County—and that leopard sharks have mouths too small to bite people. Kids also learn how to shuffle their feet beneath the water, dispersing any stingray that may be nestled beneath the sand.

Next, students lay down on the sand, then pop up, learning basic paddling and surfing techniques.

J’Kyla Faulkner, 14, took a four-day surf camp through the reservation’s intertribal youth program before this week’s activities. “It was fun. We got to experience a whole lot of stuff,” she said. 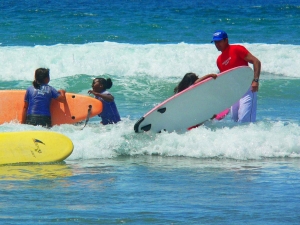 Her little sister, J’Lynn Alto-Douglas, seven, tried out surfing for the first time, gamely paddling out into the surf before turning toward shore and attempting to ride a wave. “I was really excited to surf,” she confided, “but also a little nervous.”

Shuuluk Leo-Retz, eight, learned surfing from his father and brought his own three-finned board along to masterfully ride the waves. He lives on the Viejas reservation with his father, Simeon Retz, and mother, Oletha Leo, though he learned to surf in Hawaii.

“These are the ripples compared to what he learned to surf in over there,” said his Dad, as Shuuluk eagerly prepared to ride the waves.

To cap off the camp's activities, the kids were slated to take trips to Mount Laguna and to the desert, learning about their mountain and desert heritage. “Then on the last day,” Foster concluded, “We have a big potluck celebration.”

Marisa Kezirian is a communications major at San Diego State University and a journalism intern with East County Magazine.

Thank you for the informative content. From time to time, the best knowledge come from the blogs a person would not expect. silicone breast implants