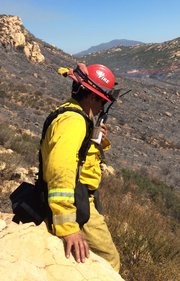 According to Captain Kendal Bortisser, the operator of the brush hog had a shovel, water and fire extinguisher on hand but the fire spread too quickly to contain. He indicated the operator had “the right equipment but just at the wrong time.”

Cal Fire recommends using mowing equipment only before 10 a.m., never during the heat of the day or at windy times. The Feather Fire started just after 1 p.m. on Featherstone Canyon Road in the Barona area of Lakeside.

The fire forced evacuations and briefly threatened homes, but fortunately no structures were damaged and no injuries occurred.