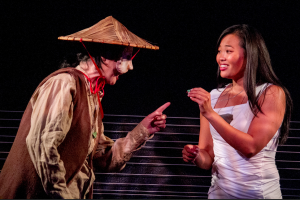 September 9, 2014 (San Diego’s East County)--In a medium such as theater in which every second on stage matters, a decade may seem like a lifetime. But as nonprofit Moxie Theatre gears up for its 10-year anniversary season, Executive Artistic Director Delicia Turner Sonnenberg reflects that “It’s like we just started yesterday.”

Fittingly, the all-female-run theater is launching its 10th-season on Sept. 18 (opening night Sept. 20) with Liz Duffy Adams’ “A Discourse on the Wonders of the Invisible World.” Adams’ “Dog Act” was the very first Moxie Theatre show back in 2005, five years before the company had even moved into its current Rolando performance space just west of La Mesa.

“It’s fun and funny, and the language is gorgeous,” says Turner Sonnenberg, who is directing “Discourse,” which catches up in the future with two characters from Arthur Miller’s 1953 “The Crucible.”

Adams was just the first of many female playwrights whose work has been presented by Moxie, the mission of which is “to create more diverse and honest images of women for our culture using the art of theater” and expand “the idea of what is feminine.”

Three of Moxie Theatre’s original founders – Turner Sonnenberg, Associate Artistic Director Jennifer Eve Thorn and General Manager Jo Anne Glover – remain on the 11-woman staff today, with Thorn frequently acting and directing, and Glover performing not only at Moxie but at other theaters in San Diego. They, along with the rest of the staff, are known as “The Moxies,” and the name is a testament to the artists’ resolve and commitment.

“We all believe deeply in the mission,” says Turner Sonnenberg. “We continue to grow and (through Moxie’s productions) to ask and answer hard questions. “I can’t promise that audiences will always love the show, but what I can promise is that they will always know why we did it.”

Part of Turner Sonnenberg’s role as executive artistic director is to select each season’s plays for production. “My secret ingredients when choosing a play is I have to love it, so I love every play that we do. My favorite shows are the ones where I can feel the impact on the actors and the audience.”

For more information about Moxie Theatre and its upcoming season, go to www.moxietheatre.com