October 4, 2011 (San Diego) –Yesterday, the Metropolitan Transit System (MTS) rolled out  a new model low-floor Trolley. MTS has received the first six of a 57-vehicle order of the new Trolleys. Two of these cars will begin service on the Green Line with the first trip out of Old Town to Santee at 5 a.m. By 2014 the new fleet will operate on the Blue Line in Downtown and South Bay and on the Orange Line in East County.

The low-floor cars, which cost $233 million, are part of $620 million Trolley Renewal project made possible by a combination of TransNet, state and federal dollars.

“The new low-floor cars usher in a new era of accessibility for the trolley system,” said Harry Mathis, Chairman of the MTS Board of 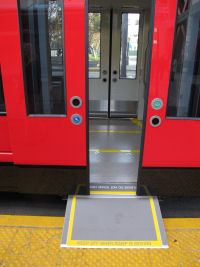 Directors. “These cars have nearly level boarding ramps, eliminating the need for stairs and wheelchair lifts. They will enable speedier boarding and quicker trips for our passengers. I am proud that our board has made a commitment and that our community has voted for the funding to keep our Trolley system as one of the best in the nation.”
To make all the Trolley stations compatible for low-floor Trolleys, Blue and Orange Line stations are being reconstructed to raise platforms and add modern amenities for passengers, including next arrival signage and new shelters. “
These new cars – and the overall renewal of the trolley system – are part of a larger vision for the future of transportation in the region,” said Imperial Beach Mayor Jim Janney, second vice chair of the San Diego Association of Governments. “Our plans call for continuing to expand the trolley system, introducing bus rapid transit throughout the region, and creating multimodal transportation corridors to give travelers more choices.”
Trolley Renewal construction at downtown stations has begun. In mid October, work to replace overhead electrical wire, platforms, and tracks, is expected to start at other downtown and near downtown stations, impacting Trolley service:
The 57 new low-floor cars are replacing older vehicles that have operated on the trolley since the 1980s. The new cars are manufactured in Sacramento by Siemens. The shorter vehicle length is one of the primary differences between these vehicles and the 11 low-floor cars MTS already operates. The newer shorter cars will allow three-car trains to operate in downtown without encroaching on pedestrian crosswalks. A new seat configuration provides the same capacity as the longer vehicles.
For updates on Trolley Station closures text: STATIONS to GOMTS (46687) or call (619) 557-4533 or visit www.sdmts.com.