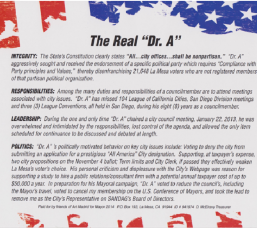 Arapostathis has responded with a detailed e-mail to East County Magazine saying the claims are untrue and “intended to deceive.” He added that La Mesa residents are “sick and tired of negative politics; that is why we need to change.”

Mayor Madrid has confirmed that Friends of Art Madrid for Mayor, the committee listed as paying for the flyer, is his official campaign committee and that his campaign did send the mailer.

The mailer claims Arapostathis missed 104 League of California Cities, San Diego division meetings as well as three League conventions. However Arapostathis says he opted to save the city money by not attending since other council members and staff did attend.

The hit piece further contends that Arapostathis chaired a single council meeting on January 22, 2013 and was “overwhelmed and intimidated by the responsibilities, lost control of the agenda, and allowed the only item scheduled for continuance to be discussed and debated at length.”

But Arapostathis says he has chaired more than one meeting, was never overwhelmed or intimidated. “I have just reviewed the entire meeting and there was no `item scheduled for continuance,’” he adds. He also offered to provide a videotape of the meeting.

The mailer accused Arapostathis of political motivations on key city issues including votes against applying for “All America” City designation.  The flyer claims Arapostathis supporter the term limits and city clerk ballot initiatives which the Mayor says would weaken voters’ choice.  It also faults Arapostathis for allegedly approving a study to hire a PR firm, for supporting a reduction in the mayor’s travel, voting to cancel Madrid’s membership in the U.S. Conference of Mayors, and for taking the lead to remove Madrid as the city’s representative on SANDAG’s board.

Arapostathis says he opposed the All America City measure based on costs. He states that he did not vote to put term limits on the ballot; council in fact did not approve the measure, thus backers had to obtains signatures to qualify it for the November ballot. He did support the city clerk measure after speaking with the city clerk, who favors the measure. He says he voted for continuance and did not vote for funding a PR consultant.

Arapostathis maintains that he did not remove Madrid from SANDAG. However, he did vote to name Councilwoman Kristine Alessio to replace Madrid on the SANDAG board, which was approved by a 3-2 vote, the Reader has reported.  La Mesa Today reported that the 3-2 vote had a “choreographed effect.”

As for travel, he says he favors having each council member have opportunities to serve on outside boards and backs pre-approval by council and transparency for such expenditures.

Araposthatis did not comment specifically on cancellation of the Mayor’s membership in the U.S. Conference of Mayors.

View the mailer here.  It’s flip-side urges voters to support Mayor Art Madrid “A leader you can trust.” It details the mayor’s achievements in office and states that his assets include “leadership skills, integrity, values and accomplishments,” among others.

Below is Councilman Arapostathis’ response in full:

This mailer is seen by many as an attempt to define me in a negative way with comments intended to deceive.

I spoke with the city attorney regarding each comment made on the mailer.  He concurred with me regarding the following facts.

First, the state constitution does not restrict a candidate from accepting contributions.  The implication made in the mailer that state constitution has been violated is not true.  In addition I did not “aggressively” seek any endorsement.

Second, it is not the duty or responsibility of any council member, as stated by the city, to attend a state lobbying group’s lunch.  I have been to those meetings before. Since we have a member of the council who attends most of the meetings and the staff attends, it would be excessive for every council member to attend.  In addition, if it costs the city $40 each time to attend, 104 meetings would roughly cost $4,160.  All the information from those meetings can be sent electronically from the League’s representative to the council.

Third, I have chaired more than one meeting, and the meeting in question on the mailer was not “out of control” and at no time was anyone, including me “overwhelmed”.  I have just reviewed the entire meeting and there was no “item scheduled for continuance”.  The last item we discussed was regarding outside board assignments.  We voted 4-0 to send it back to the member of the council absent that night.  If you would like to borrow the DVD of the meeting I have purchased a copy.

Fourth, I had discussed “All American City” with the staff and was advised that the amount of work by the city staff and the amount of city funds spent would not be worth the time and effort.  The designation would not benefit the residents of La Mesa now or in the future.

I did not support two propositions.  Did not support Term Limits.  Please check with city clerk on my vote.  They had to get signatures, and I did not sign the petition.  I did support making the City Clerk position a full time appointed position.  Did this after talking with our current city clerk.  I value her opinion and the facts she presented made sense.  I stand by that decision.

I do think our website needs to be improved.  I have discussed this with our city manager and he concurred.  This had nothing to do with the item brought up by two other council members who wished to look into hiring a public relations consultant.  When the item came up last meeting I asked if it could be continued after the first of the year.  It was on a 5-0 vote.

The entire council may still travel as much as they want but now we have to be completely transparent before we travel by getting the council approval.  Did not remove anyone from SANDAG.  Felt it would be better for the city if each council member were to serve on outside boards.  This way we have an informed council.

As I said before the election, I will not say anything negative about my opponent.  In addition, I will not bring up past events as they do not directly pertain to this election.   I have received emails from long time residents who have told me that my opponent has said many negative things about me that are completely untrue.

Thank you for the opportunity to state the facts regarding this negative mailer.

People are sick and tired of negative politics, that is why we need to change.