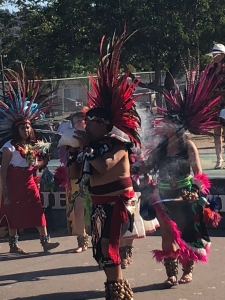 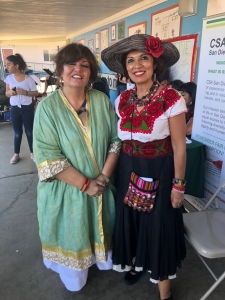 Dilkhwaz Ahmed of License to Freedom was one of the organizers along with other representatives from local organizations such as Wedad Schlotte of the San Diego ADC.

“We’ve been planning this for months,” said Ahmed. The event not only hosted various booths for organizations but also offered a free catered lunch of Mexican cuisine, and live entertainment provided for attendees. The entertainment included Aztec dancers, and a youth dance group dressed like skeletons in honor of the holiday that day – Dia de Los Muertos. 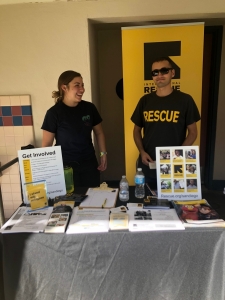 Yusef Miller of CAIR’s San Diego Chapter facilitated a booth representing CAIR and two of his own separate initiatives. The first is to gain breast cancer screening and awareness among immigrant populations from what Miller described as “modest cultures” who often neglect breast health due to modesty and cultural norms.

Miller’s other initiative was one of great importance in combating sex trafficking in the San Diego area.

“Often times these girls are still in school and living at home,” Miller said. He provides talks on recognizing if a young woman is involved in a sex trafficking ring. Some of the signs are a decrease in academics, depression, teen pregnancy, or a new partner who is older and grooms girls into the industry of illegal sex.

Miller’s talks often target immigrant and low income communities where young women are more susceptible to become victims of trafficking. While these talks are taboo in certain communities, Miller’s connection to CAIR makes him a trusted voice among the Islamic immigrant community in San Diego.

The event’s success depends largely on the availability of spreading information and continues to grow in attendance among new immigrants.t I

No no I was assigned that but didn't do it that was my bad not hers, apologies. Wow sorry you're having a bad day and taking it out on a news site that's never taken a dime of your money glad you enjoy the free reads.

To clarify this was first assigned to Jonathan who had some conflicts including a family loss, so we reassigned it to Briana, and then there was the email issue.  There is no one at "fault" for this. We do our best but donations help so our writers are not overburdened and we can afford to hire more of them.

Do you mean to tell me that it took a MONTH for your paper to report on this wonderful event!?! This time lag is ridiculous!

The writer assigned to this, a student who does work for us around her class schedule, thought she had sent it in, but it was never received at our office. It may have gone to a spam folder.  Our editor had some time off for Thanksgiving and has fallen behind due to several staffers out sick or with deaths in their family. We're sorry for the delay.

That said, we really need more community volunteers to help us cover the many wonderful events like this one!