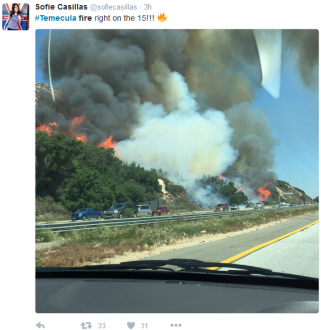 Photo: Temecula Fire along I-15, via Twitter by Sofie Casillas

June 4, 2016 -- We have reports and updates on several fires burning across southern California including I-15 between Rainbow and Temecula, the Pala fire in San Diego's north county, and a hay truck on fire near the county line in Inkopah on I-8.


Firefighters are battling a brush fire that's now at least 30 acres south of Temecula near I-15, just north of the County line.  Expect long delays if you are traveling on I-15 in the Rainbow-Temecula area. See #TemeculaFire on Twitter for photos and updates.

Meanwhile evacuations have been lifted from the Pala Fire and the Pala Temecula Road has reopened.  The blaze charred about 70 acres and is at least 35% contained, per Cal Fire.

On I-8 at Inkopah at the county line between San Diego and Imperial Counties, a hay truck has caught fire, sending smoke that is visible for a substantial distance.