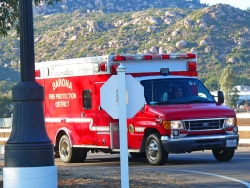 "It appears to be a murder-suicide," said Gore, adding that homicide is investigating. The gunman, Donnell Roberts, 38, killed himself and another man whose name is being withheld, pending notification of next of kin. The shootings reportedly occurred inside the  Gaming Commission manager's office.

Roberts, a former investigator for the gaming Commission, was fired in November for undisclosed reasons.  He gunman entered the building shortly after 10:00 a.m. carrying a shotgun over his shoulder, and told the secretaries to leave. Fifteen employees fled the building. Three shots were heard.

Sheriff Deputies assigned to Barona, along with Tribal Police and CHP responded to reports of shots fired. A SWAT team was dispatched. 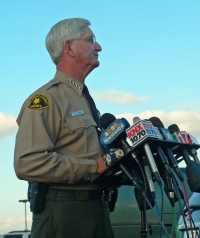 "We tried at length to establish communication with whoever was inside, but we were unable to," said Gore (photo, right). By mid-afternoon Sheriff's officers sent robots up to the building, "Upon entering they came across two mail bodies," the Sheriff said. "The SWAT team then made entry to confirm what was seen on the robot's video."

Asked how the employees at Barona were holding up, Gore replied, "They are very distraught," adding that Barona's management is providing trauma counseling for employees.

The casino was placed on lockdown for several hours as a precaution, while in other areas business went on as usual. 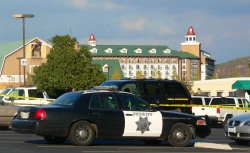 "This is only my second day of orientation," said Dalia Murillo. "We just continued with our orientation. We Weren't scared, because we were getting all the information."

A day after a murder-suicide at the Barona Gaming Commission office, investigators and the two dead men’s friends and families strung together more pieces of what happened but struggled with the question of why.
Car Hire