Update May 25:  Authorities have now concluded that the parents planned their own suicides and the killings of their two children.  The couple detailed plans in notes left behind indicating the family had troubles, however authorities have not disclosed details 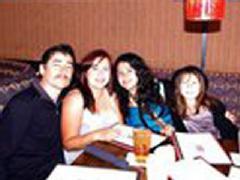 May 24, 2011 (San Diego) – Priscilla Pimienta was supposed to graduate from High Tech High School tomorrow. But her family will never see her accept her diploma. This morning, Priscilla was found dead at her home in the 100 block of Parkcreek Court, along with her parents and younger sister.

A relative visited the home early this morning on a business matter and called 911 after spotting bodies in a backyard swimming pool. The bodies were those of Priscilla, 17, her little sister Emily, 9, and her father, Alfredo, 44. The girls’ mother, Georgina, 38, was found dead in a bathtub inside the home, according to authorities.

The deaths are believed to be a case of murder-suicide, according to San Diego Police. Autopsies are pending and the causes of death have not yet been determined, nor have authorities indicated which family member is suspected of committing the murders.

Lisbet Miranda, a classmate of Priscilla’s, said the family “really loved each other,” 10 News reported. “I’m in shock….It’s just surreal.”

A candlelight vigil is planned to commemorate Priscilla tonight at 7 p.m. at Mission Bay Bonita Cove, across from Belmont Park.