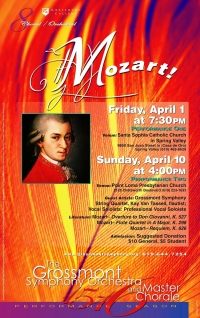 March 13, 2016 (Spring Valley) - The 2015-2016 performance season of the Grossmont Symphony Orchestra and Master Chorale continues with a special choral/orchestral project in honor of the 260th anniversary of the birth of Wolfgang Amadeus Mozart.  The concert opens with his operatic overture to Don Giovanni and ends with a performance of his Requiem—a bookending of works that share a common theme: the first recognizing a man’s judgement by God for his many sins, and the last asking God for entrance ofone’s soul to Heaven.

The program is contrasted with a piece of chamber music that the composer wrote for flute and string trio: Mozart’s Flute Quartet in A Major, K. 298 as performed by GSO principal flautist, Kay Van Tassell, and members of the Grossmont Symphony String Quartet.

Three exciting and accessible works performed in the resonant acoustics of two venues: