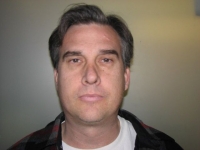 Kinney is a musician and a private music instructor.Sheriff’s Investigators are concerned because many of his students are children. Therefore, there is the possibility of unreported victims. Kinney maintained a music studio in Ramona. However, he taught private lessons throughout San Diego County. Anyone with related information about Mark Kinney or anyone who believes they may have been victimized is urged to call Sheriff’s Detective Chris Davis at 858-974-2310.