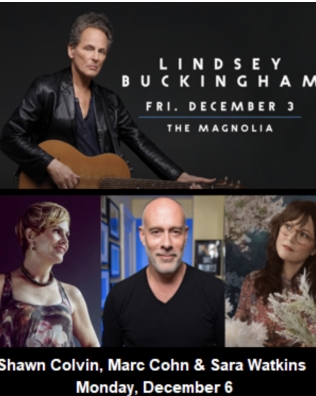 December 2, 2021 (El Cajon) – Stellar musicians will rock the night onstage at The Magnolia in downtown El Cajon this week, including Rock and Roll Hall of Famer Lindsey Buckingham of Fleetwood Mac fame on Friday, December 3 at 8 p.m.  Then on Monday, December 6 at 8 p.m., renown artists Shawn Colvin, Marc Cohn and Sara Watkins will perform together in concert.

Lindsey Buckingham:  Lindsey Buckingham is an American singer, musician, songwriter, and producer best known as former lead guitarist and male lead singer of Fleetwood Mac for decades. Buckingham released six solo albums and three live albums. As a Fleetwood Mac member, he was inducted into the Rock and Roll Hall of Fame in 1998.He was was ranked 100th in Rolling Stone's 2011 list of "The 100 Greatest Guitarists of All Time.”

Buckingham is known for his fingerpicking guitar style.

Get tickets for Lindsey Buckingham.

Shawn Colvin won her first Grammy Award for Best Contemporary Folk Album with her debut album, Steady On. She has released 13 albums and was recognized for her career accomplishments when she was honored with the 2016 Lifetime Achievement Trailblazer Award by the Americana Music Association.

For two decades, Sara Watkins has been one of the most visible artists in roots music, ranging from solo albums and Watkins Family Hour, a duo with her brother Sean Watkins, to her Grammy-winning bands Nickel Creek and I’m With Her. With the nostalgic new album Under the Pepper Tree, Watkins encompasses songs she embraced as a child herself, as well as the musical friendships she’s made along the way.

Get tickets for Colvin, Cohn and Watkins