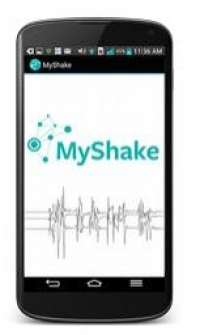 There’s an app for that. It’s called MyShake, created by UC Berkeley researchers.

Consider this:  there are only 400 seismic measuring stations in the entire state of California - but there are 16 million smart phones, making the potential usefulness of a quake-monitoring app earth-shaking, literally.

To download the app on your cellphone, you can visit http://myshake.berkeley.edu/

So how does it work?  The app runs using sensors in smart phones that detect movement.  When a tremor occurs, it will relay that info back to scientists at Berkeley lab.  Since small tremors often precede a major quake, MyShake can also send text messages to people on their cell phones warning them moments before a major quake occurs, providing precious seconds for you to brace yourself or take cover.

The app could also prove useful in parts of the world with no seismic measuring network, such as Nepal, site of a devastating quake last year.  The app can distinguish between ordinary shaking of a phone and actual earth tremors with 93 percent accuracy.

Currently, MyShake is available only for Android smart phones, though an iPhone app is under development.  The app runs continuously in the background, but won’t drain a phone’s batteries – and could help save lives when the next big quake strikes California.