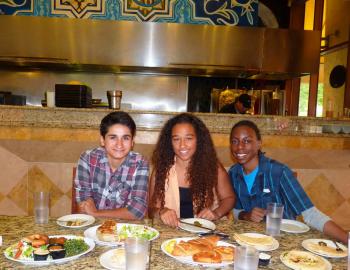 June 5, 2014 (La Mesa)--When people hear or think of California, most think of the great weather, the celebrities living in Hollywood, amusement parks, and so on. But when it comes to food, most consider California’s trademark food to be burgers or Mexican fare. But with an influx of immigrants from around the world, San Diego’s East County is now home to an array of international restaurants – including quite a few serving up Mediterranean and Middle Eastern dishes.

I've been living in California my whole life and I've dabbled in a variety of cuisines: Asian, Italian, Southern, some Mediterranean and of course, Mexican. So while interning at East County Magazine, we decided to take a team of tasters to try out Mystic Café, specializing in Mediterranean foods:  our editor, Miriam, our “East County Eater,” Leon, and myself, along with two of my internship peers, Jaden and Kayla. 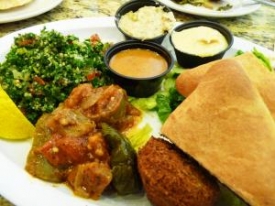 Most of us weren’t too familiar with the offerings, but collectively we were all eager to try new foods. Once we arrived, the atmosphere was very free spirited and friendly, yet with the amounts of people coming in and out made it feel more like a supermarket than restaurant. As we proceeded to enter the restaurant we then realized that directly next door is an international market that sells a wide variety of Mediterranean foods as well as other delicacies from around the world.

Once inside Mystic, the first thing I noticed and smelled was the different types of meats hanging while being cooked; it led off an aroma that reminded me of being in butchers shop. My fellow interns and I  decided to look at the giant menu hanging from the ceiling to decipher what exactly Mystic Cafe had to offer.

Things we noticed that weres familiar were seafood, chicken, beef, salad, and fries, all which we thought was a safe route. But Miriam reminded us that were here to try new food and encouraged us to step out of our comfort zone. We then relooked at t 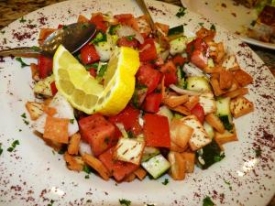 he menu and opened our eyes to things such as the Chicken Shawarma Bites and the Meat and Spinach pies. We all decided to order those dishes, along with the Fattoush (salad), Hummus, and the Veggie Plate.

Each dish was presented beautifully, offering a variety of colors, taste and textures. For example, the Fattoush (cucumber, tomato, onion, red and yellow bell peppers, pita croutons, and vinaigrette) was the most appealing to the eyes and gave a nice mixture.

The Veggie Plate (Falafel, Tabouli, Dolma) wasn’t quite as appealing as the Fattoush, but it was still eye catching. Out of all the components on the plate. the Tabouli and Dolmas were the stars. The Tabouli tasted very flavorful and fresh and Dolmas, or stuffed grape leaves, was very enjoyable. On the other hand the Hummus received mixed reviews, some thought it to be very exceptional, had smooth texture and was above average, while others thought it was average and nothing special. 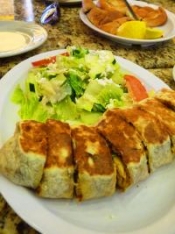 Now, the star of the show was obviously the Chicken Shawarma Bites. Everyone was really fond of  this dish due to it’s nice blend of being spicy without being too overpowering. The last two things were the Meat and Spinach Pies, which many thought were both bland; most preferred the Meat Pie over the Spinach due to the Spinach being a little overpowering in the amount of Spinach within the Pie.

While the foods were the main attractions, the corresponding sauces with each dish provided a variety of tastes. The yogurt and cucumber sauce along with the hot sauce were the best out of all of them, adding taste and texture that corresponded with the dishes with which each was served.. The yogurt sauce went really well with the Meat Pies. As for the mystery sauces, aka garlic sauce was something different for all of us, but didn’t go over too well. The eggplant sauce was overshadowed by the rest.

The meal could’ve been further enhanced if the friendly atmosphere had included excellent service. There were a couple of mix-ups with our order and we had to pick up our items at a counter instead of being served.

As a sidebar, I enjo 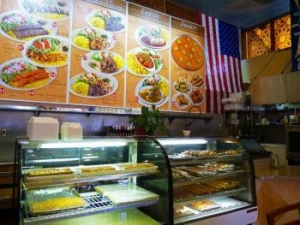 yed the restaurant's interior itself. It is tastefully done with dark wood for the most part and with the market being in place it that created a very comfortable ambiance. Overall it has a distinct Middle-Eastern feel that hints at exotic places, releasing an easy charm that provided a nice visual complement to the food.

Overall, the restaurant serves up an affordably priced menu that offers Middle-Eastern, European, and American meals for lunch and dinner. Mystic Cafe attempts to appeal to everyone's taste buds with a wide ranged, geographically aspiring menu of Middle-Eastern and European-themed foods. You’ll find a nice choice of different flavors-- and you get a lot for your money.