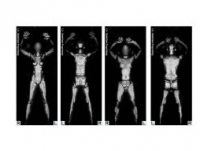 By news staff at www.GovTech.com

The revealing images, decried by privacy advocates and the general public, had been designed to spot weapons and other contraband concealed on a passenger’s body. But the TSA’s “millimeter wave Advanced Imaging Technology machines” gave security screeners an X-ray view of a passenger’s naked body, including genitalia. Last year, some of these embarrassing images were leaked online.

A software upgrade, called Automated Target Recognition, “will auto-detect items that could pose a potential threat using a generic outline of a person for all passengers,” according to the TSA announcement on Wednesday. The location of potential threats is indicated on a generic, computer-generated outline of a person that appears on a monitor attached to the scanner. “Further, a separate TSA officer will no longer be required to view the image in a remotely located viewing room,” according to the TSA.

Passengers will be able to see the same body image the TSA agent sees.

As with current policy, if the scan detects a potential threat, a TSA agent will pat-down the passenger.

“This software upgrade enables us to continue providing a high level of security through advanced imaging technology screening, while improving the passenger experience at checkpoints,” TSA Administrator John Pistole said in a statement.

The TSA began installing the body scanners in 2007, and many of them were funded by the federal stimulus. According to the federal government, there are nearly 500 imaging technology units at 78 airports nationwide.

Last week a federal appeals court ruled that the TSA’s use of the full-body scanners is constitutional.

Reprinted with permission from
http://www.govtech.com/public-safety/Naked-Body-Scans-Airports-Phased-Ou...