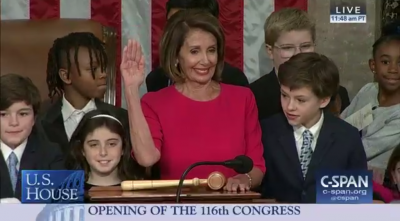 Pelosi spoke of a mandate to provide transparency, improve healthcare and reduce prescription drug costs, rebuild the nation with green, modern infrastructure and more.  She announced that the initial bills introduced in the House will aim to assure that “people can have confidence that government works for the people, not special interests,” as well as to “make America more American by protecting our patriotic, courageous dreamers,” or young immigrants who came to America as children.

She quoted former Republican President Ronald Reagan’s final presidential speech, in which he stated, “If we ever close the door to new Americans, our leadership role in the world will soon be lost.”

She pledged to keep our nation safe from threats foreign and domestic, including cyberthreats and terrorism. She indicated that the current Congress has responsibility as “daunting and demanding” as any ever facing our nation and pledged to “meet that responsibility with wisdom, with courage, and with grace.” In closing she stated,[“"Together we will let it be known that this House will truly be the people's house. Let us pray that God may bless our work and crown our good with brotherhood – and sisterhood – from sea to shining sea.”

Speaker Pelosi next invited her grandchildren and all other children in the House gallery to join her on the podium for her official swearing in ceremony, then stated, “I now call the House to order on behalf of all of America’s children.” As Speaker, Pelosi is now third in the line of succession for the presidency, after Vice President Mike Pence.

Republican Congressman Kevin McCarthy, also a Californian, was sworn in as House Minority Leader. Later he tweeted, “While we seek cooperation, there is one core principle upon which we will not compromise. Republicans will always choose personal freedom over government control.”

Getting down to business, the House approved new rules including a “pay as you go” provision to require that new spending be offset by budget cuts, with exemptions allowed for emergencies. The rules package approved by the Democratic majority, along with a handful of Republicans, also requires that bills be publicly available for 72 hours before a House vote,  creation of a Selection Committee on the Climate Crisis, and a subcommittee on diversity in the banking industry, and a rule allowing religious headgear to be worn in the House chamber.

House committees now chaired by Democrats armed with subpoena power are now gearing up to conduct investigations .In an interview this week, Speaker Pelosi said impeachment is not off the table, but must not be considered for political reasons.Democrats also introduced H.R.1, sweeping anti-corruption legislation.

As for the budget, talks with the new leadership and President Donald Trump have thus far failed to resolve the impasse. The President remains adamant  that he will not sign a budget without $5 billion for a border wall, but Democrats say they won’t pass a budget with funding for the wall.

Trump was unable to get his budget pushed through even when Republicans controlled both the House and Senate. The GOP still has a solid majority in the Senate, but not the House.  Even if both Houses were able to come to a consensus budget bill to reopen the government, Trump could veto it – and the prospect of both houses mustering up enough votes to override a presidential veto appear slim.  Meanwhile, the impacts of the shutdown deepen as the weeks pass by, going beyond government workers missing paychecks to impact the American people as programs such as SNAP, which provides food assistance for the poor, run out of funds.