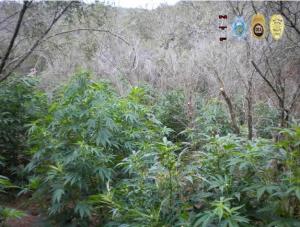 Gary Arant, General Manager of the Valley Center Municipal Water District, stated that the 72 million gallons of water equated to 220 Acre Feet of water, or enough water to serve 440 average family's for a year.  He said theft of that much water would be worth $420,000.

Authorities indicate they will continue to intensify their efforts in this area and work with National Guard, BLM, and US Forest Service partners to halt the extensive environmental damage that these grows cause and to ensure that our public lands remain safe.

This year, NTF has continued to see Butane Hash Oil Extraction Laboratories in relation to indoor marijuana grow operations.  There were 34 Hash Oil Laboratories seized since January of 2015.

“DEA/NTF will continue to combat the dangerous and potentially deadly Hash Oil Extraction Labs,” says DEA San Diego Special Agent in Charge William R. Sherman, adding that the agencies also remain concerned about illicit marijuana cultivation. “These operations are a significant threat to public safety and DEA/NTF will continue to investigate these illegal and dangerous cultivation and manufacturing operations.  All grows seized on public lands and most on private property involve theft of water and diversion of natural sources of water.  During this time of drought, San Diegans should be concerned that our water is being stolen for a criminal enterprise.”

For further information about marijuana cultivation, please refer to www.dea.gov.