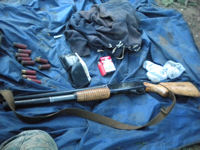 During calendar year 2011, NTF and our law enforcement partners seized over 199,599 marijuana plants from 150 separate grow locations – 83 outdoor sites and 67 indoor locations.  At these locations, the investigators seized trafficker assets valued at approximately $ 1,288,924.00 dollars.  107 subjects were arrested in connection with these operations.

Of additional significance is the fact that 65,955 were removed from our public lands.  That includes both U.S. Forest Service lands and Bureau of Land Management (BLM) lands.  DEA/NTF will continue to intensify their efforts in this area and work with our National Guard, BLM, and US Forest Service partners and to halt the extensive environmental damage that these grows cause and to ensure that our public lands remain safe.

“DEA/NTF has a dedicated team, led by the San Diego County Sheriff’s Department, whose purpose is solely to conduct marijuana eradication operations in San Diego County,” says DEA San Diego Acting Special Agent in Charge William R. Sherman.  “Our focus is to arrest and prosecute those individuals who are responsible for putting this dangerous drug on the streets of San Diego”.
For further information about marijuana cultivation, please refer to www.dea.gov.