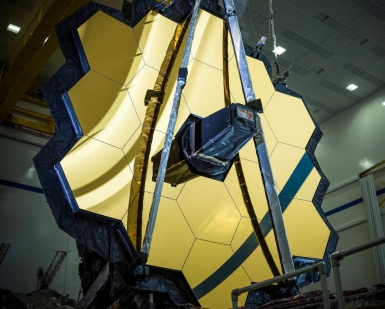 By Roger Coppock and Miriam Raftery

Photo:  the James Webb Space Telescope, the premier space science observatory of the next decade, is targeted for launch Dec. 25 from Europe's Spaceport in French Guiana. Courtesy of NASA/Chris Gunn

The public is invited to watch the launch live on NASAT TV, the NASA app,   and the agency’s website. The public can also watch live on Facebook, Twitter, YouTube, Twitch, and Daily Motion. The telescope will be launched from an Ariane 5 rocket from Europe’s Spaceport in French Guiana, South America.

As NASA prepares for Webb to #UnfoldTheUniverse, the agency invites the public to join the James Webb Space Telescope social event on Facebook. Participants will be joined by NASA, ESA, the Canadian Space Agency, and the Space Telescope Science Institute. Stay up to date on the latest mission activities, interact with Webb experts in real-time, and watch the live launch broadcast with an interactive chat.

The Webb mission, an international partnership with the European Space Agency (ESA) and Canadian Space Agency, will explore every phase of cosmic history – from within the solar system to the most distant observable galaxies in the early universe, and everything in between. Webb will reveal new and unexpected discoveries and help humanity understand the origins of the universe and our place in it.

This space telescope improves on infrared sensing technology also used for tracking CO2 in Earth's atmosphere.  Those improvements will make a better next generation of CO2 satellites.  Science and technology are highly interrelated.  Their development is synergistic.  Putting a telescope at L2 helps fix global warming.

Together with the Ariane 5 rocket and ground communications, JWST is the most complex system our species has ever produced.  After launch, it will take months to deploy and calibrate.

It all has to work the first time.  'Do overs' are going to be very  expensive, billions of dollars.  Unlike the Earth orbiting Hubble Space Telescope which was repaired in orbit, we currently do not have the hardware to send an astronaut a million miles away to the second Sun/Earth Lagrange Point, L2, to fix the JWST.  That's about four times the distance to the moon.