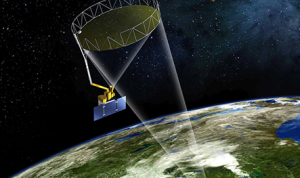 A decades long archive of planet wide soil moisture data, when collected, should answer some questions about the relationship between food production and global warming.  Soil moisture should be strongly correlated with atmospheric temperature.  A global warming signal should therefore be detected in the long-term soil moisture record.

In addition to soil moisture, this instrument reports "freeze/thaw state." The freeze/thaw and global warming relationship is obviously expected, especially because the CO2 greenhouse warming effect is strongest on winter nights. (See Arrhenius, 1896, or attend one of my presentations.)

Overland spatial resolution is small enough so a San Diego County soil moisture index could be extracted from the data.  That index, updated online every three days, would be useful to local farmers and gardeners.

SMAP launches Jan. 29, 2015, from Vandenberg atop a United Launch Alliance Delta II.  In addition to live coverage on NASA TV, rocket enthusiasts may be able to track the launch from San Diego County.