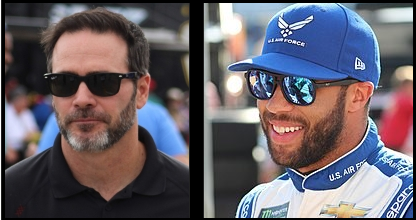 Update June 23, 2020:  In a show of solidarity, all drivers in the Talladega race yesterday afternoon joined together to push Bubba Wallace's car to the front before the race began, after Jimmie Johnson announced he would stand with Wallace during the national anthem.  During the race, Wallace's vehicle ran out of gas, so another drived pushed him over the finish line and he came in 14th.  Johnson finished 13th and said he is "very proud of our sport."

Later in the day, the FBI announced that video shows the rope noose used as a door pull had been in the stall newly assigned to Wallace's team since 2019.

June 22, 2020 (San Diego’s East County) – Seven-time NASCAR champion Jimmie Johnson, an El Cajon native and hometown hero, is ending his final year in the sport by taking a strong stand against racism in the sport.

Last week, NASCAR announced a ban on the Confederate flag, a move long pushed for by Bubba Wallace, one of the most successful African-American drivers in NASCAR racing history.

Yesterday, NASCAR announced that a noose had been found in the stall of the Wallace team 43 prior to the Talladega Super Speedway race in Alabama (which has been postponed until 1 p.m. today Pacific Standard Time due to inclement weather).

The U.S. Justice Department and NASCAR have both announced investigations into the action, which could be charged as a hate crime.

Jimmie Johnson tweeted, “I can’t begin to fathom the pain this action has caused. I stand with you @BubbaWallace.”

“We are angry and outraged,” NASCAR said in a statement, calling the noose incident a “heinous act” and adding that NASCAR “will do everything we can to identity the person(s) responsible and eliminate them from the sport. As we have stated unequivocally, there is no place for racism in NASCAR, and this act only strengthens our resolve to make the sport open and welcoming to all.”

Last week, Johnson took an earlier stand against racism, tweeting, “Due to recent posts on social media I have decided to end my relationship with Beam Designs.” 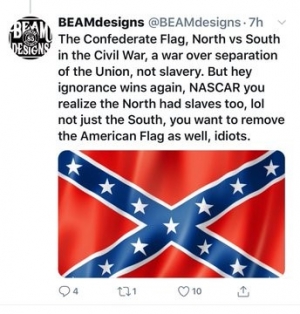 Wallace, along with drivers Ryan Blaney and Kyle Busch, all severed their ties with Beam Designs after the helmet designer tweeted an image of the confederate flag with a message stating, “The Confederate Flag, North vs. South in the Civil War, a war over separation of the Union, not slavery. But hey ignorance wins again, NSCAR you realize the North had slaves too, lol not just the South, you want to remove the American Flag as well, idiots.” 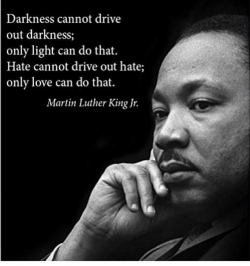 Johnson’s Twitter feed also includes recent posts educating his followers on Juneteenth, the end of slavery in the U.S. and a symbol of the fight for racial equality, as well as a post lamenting the killing of George Floyd by a Minneapolis Police officer.  Another post quotes Martin Luther King Jr., stating, “Darkenss cannot drive out darkness; only light can do that. Hate cannot drive out hate, only love can do that.”

On June 1st,  Johnson made his own views clear. “It hurts to see our country being torn apart by racism & hate. I can’t pretend to understand what black men & women have experienced but I can speak out & condemn racial inequality. I hope love for all mankind can prevail & make changes to build a better future for our children.”

Long viewed as a hometown hero for his racing victories and philanthropy in giving back to local schools, Johnson has now scored yet another win in the eyes of many fans by fighting back against racist symbols and actions in the sport that made him famous.

The Bureau Land Management name has been taken over by the black lives matter movement.