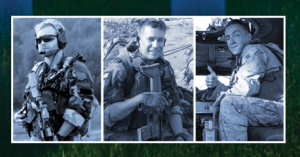 September 3, 2014 (San Diego)--Three brothers in the Wise family went to war, serving in our military.  Beau remains on active duty in Iraq.  Jeremy joined the Navy Seals and Ben joined the Army’s elite Green Berets.  A suicide bomber took Jeremy’s life in Afghanistan in December 2009.  Just over two years later, in January 2012, Ben died in a firefight in Afghanistan.

Their cousin is Nathan Fletcher, former Assemblyman and Marine Corps veteran. “As a combat veteran of the Marine Corps, I have lost too many friends,” Fletcher says. “But no family should ever lose a veteran once they return from war.”

Now Fletcher has established a foundation, the Three Wise Men, in honor of the Wise brothers.  The organization to help returning vets will hold its first fundraiser for veterans, a crossfit event, on the deck of the USS Midway on October 18th.  Similar events are planned on Veterans’ Day Weekend in hopes of drawing national attention to the needs of returning combat veterans.

“If we truly honor those who gave their last full measure of devotion, it’s our duty to ensure that those who survive combat can also survive the transition home,” says Fletcher.  He calls it a tragedy that America is on track to lose more veterans to suicide than the number who died in combat.  Up to 50 veterans kill themselves every day in America, often as a result of untreated psychological trauma inflicted by combat.

The group aims to raise awareness of problems facing US. Veterans returning from war and provide direct support to organizations and programs that help them transition from combat to civilian life.

Fletcher concludes, “These warriors fought for our country. Now it is our duty to fight for them.”

You can learn more or sign up to participate in events to benefit veterans at  www.ThreeWiseMenTribute.org.