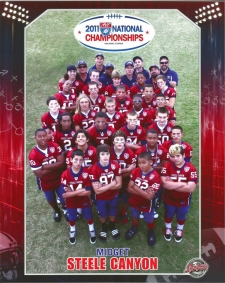 After a perfect 12-0 season, the team won the San Diego Championship against Menifee Red on November 19, 2011. The Cougars headed to Florida in December and competed with seven other teams, the best of the best, from around the country. These 8th graders played hard and won American Youth Football’s National Champion title.

"It was my privilege to watch these young men represent SCYFBC locally at the San Diego conference and at the national championships. Not only did they show their respect for the game, and all the teams they played, but also showed the respect they have for everyone by the way they carried themselves away from the field,” he said.  “I thank these young men and the GREAT coaching staff that help build this team and brought Steele Canyon Youth Football & Cheer our first of many NATIONAL CHAMPIONSHIP titles. Thank you men for the memories!"

Steele Canyon Youth Football & Cheer will be having registration beginning in March.  Please check the website for details.  www.scyfb.org