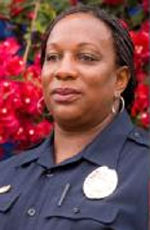 Donna Williams Selected as Best in Law Enforcement for Child Abuse Victims
March 25, 2012 (Huntsville, AL) -- The National Children's Advocacy Center (NCAC) presented the Outstanding Service Award in Law Enforcement to Donna Williams, who served as a Detective with the San Diego Police Department from 1989 until her unfortunate death in 2011. Detective Cindy Brady accepted the award on behalf of Williams. The honor came at the 28th National Symposium on Child Abuse in Huntsville, Alabama.  Detective Williams’ daughter, De Kenya Williams, was in attendance at the award ceremony.

Williams received the prestigious award at the Symposium's annual awards luncheon. The criteria for the Outstanding Service Awardsis based on the pioneering work that began with the formation of the National Children’s Advocacy Center in 1985 and revolutionized the way America responds to child sexual abuse. The honors are intended to recognize professionals who have made a significant positive contribution to services that address child abuse and exploitation in their communities.

In recognizing Williams, NCAC Executive Director Chris Newlin noted that she had many opportunities to promote and work her way up the organizational ladder within the police department, however, she always politely declined such invitations.  She loved the work that she did, the children and families that she served, and the team members with which she worked.
Newlin said, “Donna left a legacy and reputation that no one has or will come close to emulating. Donna was a great role model for how teams should work together.”