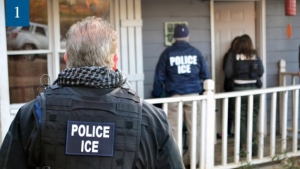 “DHS policies confirm that ICE can target anyone who is removable for detention and deportation, even if they fall outside of the broad ‘priorities’ of the President’s executive order.” –Community advisory issued by the National Immigration Project of the National Lawyers Guild

April 2, 2017 (San Diego) – The National Immigration Project (NIP) of the National Lawyers Guild has issued a Community Advisory on memos issued by the Department of Homeland Security in late February  to implement President Donald Trump’s executive orders ramping up deportation of  immigrants.  The immigration attorneys warn of sweeping changes that represent “a major shift and escalation in immigration enforcement.”

The NIP includes legal and policy analysis of key changes in immigration enforcement that “we believe will most impact community defense strategies," along with tips and suggestions for immigrations and those who assist immigrations.

Almost any undocumented immigrant could be deported

According to the NIP analysis, “DHS policies confirm that ICE can target anyone who is removable for detention and deportation, even if they fall outside of the broad ‘priorities’ of the President’s executive order.”  Almost anyone deemed “removable” due to violating immigration law can now be deported.

There is an exception for some under the Deferred Action for Childhood Arrivals (DACA) program, though DACA grantees who haven’t reapplied  in a timely manner, or who have a criminal record or appear in a database, may still be deported.  DACA grantees in those latter situations should speak with an attorney quickly, the NIP advises.  All DACA recipients should talk to an attorney before leving the U.S.

The advisory warns it’s difficult to predict how ICE may target classes or categories of people.

NIP confirms that some people with a long presence in the U.S. and no criminal convictions or immigration history have been detained.

Changes make it easier to arrest and deport people; lawyers advise carrying papers to prove if you’ve been here more than two years

DHS has also made changes to make it easier to arrest and deport people.  The agency is expanding expedited removal, which used to apply only to those within 100 miles of the border who couldn’t prove they were here 14 days or more.  DHS may opt to extended that to two years and could apply it to anywhere in the U.S., not just areas near the border.  DHS is also planning to build new detention facilities near the border, “the majority of which operate under terrible conditions,” according to NIP’s advisory.

The lawyers recommend that immigrants who have been here longer than two years carry documents to prove this, preferably not documents that list birth place, country of origin or your home address.

Immigrants may be deported to Mexico, even if they’re not Mexican

Under the new DHS policies and executive orders, people may be deported to the country from which they entered the U.S., meaning many could be sent to Mexico even if they are from other countries.

DHS threatens to prosecute and deport people who help family members, including children, cross the border to try and rejoin parents or staying with family members

Parents and family members who try to help immigrant family members, especially children traveling to the U.S., can now be prosecuted and deported.  Agents routinely ask during interrogations of people arrested at the border; now this information can be used to detain and deport their relatives already here.  The lawyers’ group warns that family members who accompany friends or family to an ICE check-in or supervised visitation can now be picked up and deported, even at the Office for Refugee Resettlements.  You can also be deported if you are undocumented and sponsor someone else’s request for parole, bond or release.

The attorneys warn that new policies make it very difficult for asylum seekers and others to obtain humanitarian parole since leadership of Customs and Border Patrol or Immigration and Customs Enforcement must sign off on any parole requests.  This could have major impacts on children and unaccompanied minors.

Sensitive locations not being honored:   DHS has said that a sensitive locations memo remains in effect for schools and shelters. However,  the  NIP advisory warns that they have received several stories of people targeted  by ICE or CPB at or near such locations, suggesting this guidance is not being applied. ECM has also received word that of an arrest for deportation made near a local school.

This situation is partially offset in California, where state law limits cooperation between local police and sheriff officials with federal officials for purposes of deportation, though convicted criminals and those on gang member lists will be most at risk.

Crackdown on criminals and sanctuary cities

The new guidelines lower the threshold for prosecuting federal immigration crimes.  ICE is also setting up a “Victims of Immigration Crime Engagement” or VOICE to publish weekly info on noncitizens with criminal records in sanctuary cities including the arrest, charge or conviction as well as names and personal information on these individuals.  The info will be available to the public.

The executive orders and DHS policies eliminate privacy protections for noncitizens,  even those with no criminal records, such as young people protected under DACA.

In some cases, publication of information may be illegal, however.   For example, publishing personal details on people protected by the Violence Against Women Act or disclosing juvenile records in states such as California could put the federal government in violation of other laws.

I have more faith in the Lollipop Guild

on deportations. Obama deported more illegal immigrants (three million) during his tenure than the sum of all deportations throughout the 20th century. . . .here. Trump isn't quite there yet, despite the scary headlines.

who committed crimes other than just crossing the border or answering questions as needed to get a job.  He deported the "bad hombres" who were gang members, killers, etc. but protected innocents brought here as children and people whose children are citizens.

Trump by contrast is ripping families apart, deporting mothers while leaving their young children who are citizens here without their moms.   Even where the mother did nothing wrong for many years, after crossing the border and getting work.  They are striking fear into immigrants who are afraid to report crimes such as domestic violence or to stop if they are in a car accident.

To me it's wrong to terrify children, for any purpose.  I just can't get over that.

There are many who appreciate the POV that East County Magazine provides. Not necessarily Alternative or Main Stream. Would you otherwise have the opportunity to make a local post about the "Guild" or express yourself, other commenter, so childishly blithe about ECM? If so, where?

People are welcome to their opinions but not lies and name calling.

Personally I see nothing wrong with a group of lawyers working, in many cases volunteering, their time to help vulnerable people.   The reality is that immigrants who don't have access to a lawyer, and the vast majority don't, almost always wind up deported.  That's true of asylees, refugees, and undocumented people.

I was surprised to learn there is no require for them to have legal counsel.

To me it is not "leftist" to want every human being facing a legal proceeding to have counsel.   Citizens are entitled to that under our constitution even if they are murderers,  yet someone merely accused of a crime that they may not have committed can be deported without legal representation now  under Trump's order.

If they are guilty of a crime, that's one thing. If someone is falsely accused, why the rush to deport them without due process?  It's unAmerican.

with a sordid history as outlined here. The Guild supported protests against President Trump's inauguration and continue in their efforts to undermine the government.